"The Universe is Mental - held in the mind of the All."
~ The Kybalion

The majesty of the early Egyptian civilization still lingers in the collective mind of humankind. The memory of  splendor and magnificence of Ancient Egyptian society did not only reflect the impressive architecture and political accomplishments, but also the cultural, philosophical and spiritual legacy which engraved itself into the DNA of humanity. One of the main aspects of this magnificence is the passing of the sense of the existence of a transcendental and mystical Divine Order, sustained by purity and balance.  It is the perfect state of things toward which one should strive and which is in harmony with the creator god's "intentions".

The Ancient Egyptian people had a deep conviction of an underlying holiness and unity within the universe. The cosmic balance was achieved by the correct public and ritual life. Any disturbance in cosmic harmony could have consequences for the individual as well as the state. For instance, an impious King could bring about famine or blasphemy could bring blindness to both the person and his kingdom. 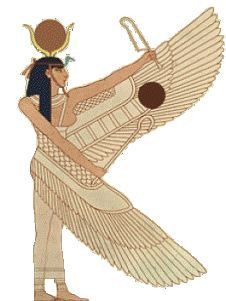 Throughout nature and the manifested Universe, we can easily perceive that there is an inherent order; a pattern of movement and dance that rules the operational aspect of All That Is.  The Ancient Egyptian people were very much aware of this underlying principle on the sublime level. The Goddess Ma'at was the epitome and the personification of cosmic order, truth, justice, and rightness. Despite being as omnipresent as Ma'at is in the Universe, the Egyptians felt that the subtle balance created by her influence could be disrupted easily. Thus, moving away from Ma'at, or away from Divine Order and truth, could only create disorder, chaos, disease and moral decay.

The Goddess Ma'at was the epitome and the personification of cosmic order, truth, justice, and righteousness. Despite being as omnipresent as Ma'at is in the Universe, the Egyptians felt that the subtle balance created by her influence could be disrupted easily. Thus, moving away from Ma'at, or away from Divine Order and truth, could only create disorder, chaos, disease and moral decay.

The head of the legal system was officially the Pharaoh, who was responsible for enacting laws, delivering justice, and maintaining law and order. The totality of codified laws, the Ancient Egyptians also referred to as Ma'at. Although no legal codes from ancient Egypt survive, court documents show that Egyptian law was based on a common-sense view of right and wrong that emphasized reaching agreements and resolving conflicts rather than strictly adhering to a complicated set of statutes.

There are at least seven fundamental principles that supported and inspired all the philosophy and mystical spirituality of the Pharaoh and his kingdom.

1. There is but One Universal order

Each and every sentient being, or situation in their time, is bound to accomplish a specific mission on earth.

2. There is One Cosmic Unity

This principal is based on the concept that everything that exists is a particular manifestation of the One essence. As above, so below.  What is questionable is a reflection of what is not.

3. There is only One Measure

One measure, one portion, one ration was considered the base from where all beings, things and time constitute mere exponential figures. They are only multiples and submultiples of the same portion.

4. There is One Cosmic Law that precedes all spiritual laws:

This One Law determines that there are a Universal order and a Cosmic Unity that manifests itself through the One measure. We firmly believe that the Egyptians carried and embraced the primary principal of the Lemurian Law of One.

5.  There is only One Intelligence

6. There is only One Path

This is the way of obedience to the One Law that reigns the Universal Order and that precedes all others. The One Law determines the Unity of all parts with its Essence.

7. There is only One Reality

The understanding of the existence of One Reality reiterates that the Universe manifests itself through repetition of the same spirit through different stages of conscious expressions. There are the infinite aspects of manifestation that make creation possible and intelligible, throughout the various parcels of time.

Inside all these principles, we perceive a deep philosophical reach. Each principle reflects a comprehension of Cause and Effect, a manifestation of facts and events.  The Ancient Egyptian civilization was mesmerized by the study of the mysteries of Life and Death. They believed that death was a portal for a new and real life, as the seed needs to “die” to bring to life a new plant.

To download a copy of The Kybalion by Three Initiates, referenced in the quote above, please register and then click:
The Kybalion