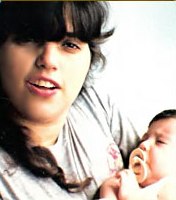 She is an anthropologist and degreed Economist, who did her post-graduate work in city services planning for the island Itaparica, has worked for the Brazilian State Commerce Department as the statistics supervisor, was a bank auditor, a radio talk show personality and newspaper columnist in Brazil, a prominent tarot reader and astrologer for the state of Bahia, Brazil, an organic farmer, and a Death Row minister.

Not to mention a mother to two girls and Stepmother of two boys - a full-time job in itself.

Born in Salvador, Brazil, Liane Buck is the oldest daughter of an internationally known doctor and Professor of Medicine; she was raised in a very devout Catholic family and originally wanted to be a nun.  As a young adult, she worked for the Jesuit Priests from CEAS (a Non-Profit organization) as an Economist and Project Manager developing Humanitarian and Social projects to raise the standard of living among the poor in Bahia, Brazil.  With the Jesuits and others, Liane has studied extensively in religious matters and esoteric knowledge.  Among others, she is a member of the Order of Saint Michael.

Shortly after Liane moved to America, she was the victim of a drunk driver and nearly lost her life.  During the months she spent unable to move while her body mended, she made a commitment to God that if she recovered, she would complete the 14 Acts of Mercy.

The Acts of Mercy are actions and practices which the Catholic Church considers expectations to be fulfilled by believers, based on the Sermon of the Mountain and the Beatitudes (please see the House of Faith for a description of the 14 Acts of Mercy).

Under the nom de plume of Butterflygris, Liane became popular on YouTube for the creation of many educational and inspirational videos (please visit our Videos Section to view many of them).

The last two of the 14 Acts of Mercy Liane completed were the Consolation of the Doubtful and the Comfort of the Sorrowful.

These took the form of an inspirational Myspace page dedicated to Random Acts of Kindness.  She did this not under her own name, but under the name RaK because it was the message and not her name she wanted to share herself.

The site became very well known and topped 17,000 friends in the first year.  It was through Myspace that she met Christopher Buck and together created Humanity Healing based on the concept of a multifaceted approach to healing by combining alternative healing modalities with spiritual growth and counseling.  Liane sees the materialization of Humanity Healing as part of her Soul Contract and feels very blessed to have connected with so many who share a similar dream of ordinary individuals coming together to make a significant difference in this world.

“The only weapon of mass destruction is indifference.”