Personification of the Sacred Fire and the Inner  Sacred Space 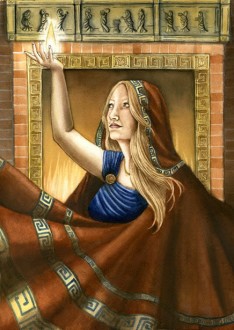 Hestia is the Greek Goddess, who is the embodiment of the sacred fire of the pyre and hospitality of hometown. The myth of Hestia is the flame of life. Hestia, which in Greek means passing through light or consuming, always had honor from of all deities, becoming the only one to be worshiped in all men's houses and the temples of all the gods.  Courted by many gods, especially the beautiful Apollo and Neptune, Hestia rejected all marital proposals and asked her brother Zeus to protect her virginity. Daughter of Chronos and Rhea, Hestia was one of the Olympian deities. Because of the desire to remain chaste, Hestia and her priestesses were vestals that continued watching the sacred fire in the temples permanently.

Usually represented wearing a long dress, often with her head covered by a veil, Hestia is the goddess who never left Olympus and never engaged in quarrels, those being the wars of gods and mortals. The animal most sacred to the goddess is the donkey. As the goddess of the sacred fire, she represented the deity of the home, defending the family's life, presiding over the home environment and family ties. In Rome, the sacred flame of Vesta Roman united all in one family.

Hestia was worshiped before any of the other gods in all places and festivals as she was the oldest and most precious of the goddesses of Olympus. A promise made in her name was the most sacred of oaths. From Zeus, she received the honor of being worshiped in every household, and to be included in all the sacrifices. She was allowed to remain at peace in his palace surrounded with respect of gods and mortals. She was the personification of stable housing, where people gathered to pray and offer sacrifices to the gods, and worshiped as protector of cities, families, and colonies.