Ursa Major Codex is one of the three substrates from where all the Activations of the Stellar Codes™ come from. The Deep Spiritual Meaning of the Influence of these Fixed Stars (in reality other Suns, just like ours) is no novelty for those that have been traveling on the path of Self-discovery and sincerely intend to build the way back to the original Divine Blueprint.

“Reach high, for stars lie hidden in your soul. Dream deep, for every dream, precedes the goal.”
~Pamela Vaull Starr 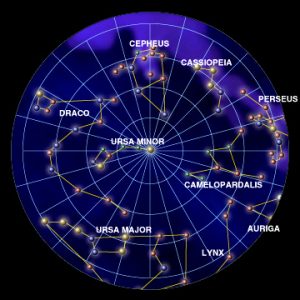 The Ursa Major or Ursae Majoris is one of the most important constellations in the night sky, and it has been part of the imaginary of Mankind through ages. Ursa Major is not a constellation per se, but it is an asterism, which means a collection of Fixed Stars[1].

“The Moon shall shine with the brightness like the Suns,
and the Sun with Seven times his wonted brightness seven days light in one.”
~ Isaiah 30,26

The stars that make up the Big Dipper are seven in number, and follow the Greek alphabet, making them easy to remember. Thus, apart from Alpha Ursae Majoris, the Dipper's bowl is made up of beta, gamma, and delta, then epsilon, zeta, and eta finish the asterism.

This particular asterism also has a long history, seen in many cultures as a chariot or wagon. The seven are not moving in the same direction, and over time the asterism will dissolve. In fact, it is only the last 50,000 years or so that a noticeable "dipper" has formed. As the stars move their separate ways, the outline will more and more become plough-like, with the pointer star (Alpha Ursae Majoris) steering in front of the rest, and somewhat south of its present position.

As one of the few star groups mentioned in the Bible (Job 9:9; 38:32; Amos 5:8)(Orion and the Pleiades being the two others), Ursa Major was also pictured as a bear by the Jewish peoples. 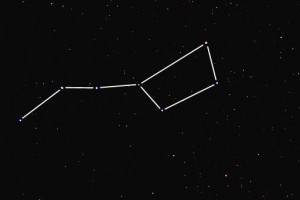 In Greek mythology, Zeus, the king of the gods, lusts after a young woman named Callisto, a nymph of Artemis. Hera, Zeus's wife, transforms Callisto into a bear due to her jealousy of Callisto being extremely beautiful. Callisto, while in bear form, later encounters her son Arcas. Arcas almost shoots the bear, but to avert the tragedy, Zeus hurls them both into the sky, forming Ursa Major.

In the Hindu tradition, the Great Bear (sapta-riksha) is the abode of the seven Rishi; identifying Kratu with the star Dubhe; Pulaha with Merak; Pulastya with Phecda; Atri with Megrez; Angiras with Alioth; Vasishtha with Mizar; Bhrigu with Alkaid.

The name "The Great Bear" seems to have been assigned to the constellation in antiquity, due to its northern latitudes. Only a prodigious bear could live in such a northerly clime. Interestingly, a number of North American tribes (Algonquin, Iroquois, Illinois, and Narragansett, among others) also associated the constellation with a gigantic bear. The Iroquois Native Americans interpreted Alioth, Mizar, and Alkaid as three hunters pursuing the Great Bear. According to one version of their myth, the first hunter (Alioth) is carrying a bow and arrow to strike down the bear. The second hunter (Mizar) carries a large pot, the star Alcor, on his shoulder in which to cook the bear while the third hunter (Alkaid) hauls a pile of firewood to light a fire beneath the pot. The constellation is low in the sky in the autumn evening sky, so it was said that the hunters had injured the bear and its blood caused the trees to change color to red.

This constellation is intimately related to the Vibrational Frequencies of the Number Seven. In Ageless Wisdom tradition, it is said that that there are seven “Luminous Emanations,” which are the Rays of Creation (involution) and the same seven Rays of re-integration (evolution). Each Ray has been guarded by One Deva, a tutelary angel or a “Sage.”

The seven Luminous Vibrations correspond to the Seven Sounds, also interconnected with the process of Creation.

"And the Word was made flesh, and dwelt among us, (and we beheld his glory, the glory as of the only-begotten of the Father) full of grace and truth."
~John 1.14

The Original and unique Vibration multiplied (replicated) itself and differentiated itself in different Rays, levels, and forms. The Gnostics considered and used the seven Greek vowels to designate “Magic Healing sounds” and assign them to musical notes. Each musical note corresponds not only to one Number, but also one of the Astrological Influence.

The Seven Vibrational Planes of Creation exist simultaneously, and they can be regarded as equal and successive emanations, organized into a hierarchy of the same Uncreated Source, or All That Is. Tradition also talks about the existence of the Seven Heavens, which is, in mundane language, can be translated as a Place of “plenitude” where a Soul can be closer to the Source and experience the pure love of our Creator.

[1] The fixed stars (from the Latin stellae fixae) are celestial objects that do not seem to move in relation to the other stars in the night sky.