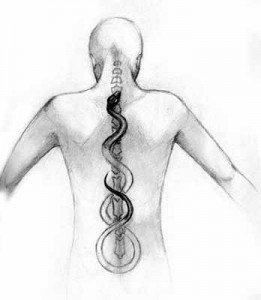 Kundalini is a spiritual energy, the energy of Consciousness.

According to the philosophy of Tantra, the entire universe is a manifestation of pure consciousness. In manifesting the universe, this pure consciousness seems to become divided into two poles or aspects, neither of which can exist without the other.

One aspect, Shiva, is masculine, retains a static quality and remains identified with unmanifested consciousness. Shiva has the power to be, but not the power to become or change. The other aspect, Shakti, is feminine, dynamic, energetic and creative.  Shakti is the Great Mother of the universe, for it is from her that all form is born.

The human being is a miniature universe.  All that is found in the cosmos can be found within each individual, and the same principles that apply to the universe apply in the case of the individual being.

This Course will deal with the understanding, and Awakening, of the Kundalini energy.