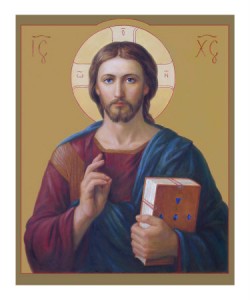 The Cosmic Christ is God in his eternal essence, but it is creature in his temporal existence, "You heard that I said to you, 'I go away, and I will come to you.' If you loved Me, you would have rejoiced, because I go to the Father; for the Father is greater than I.'" (John 14:28).

The term “Historical Jesus” refers to the reconstruction of the life and teachings of Jesus of Nazareth; This reconstruction is based on analysis of both the Gospel texts and the Apocrypha. Also, other religious texts, from Jewish, Muslim or Hindu sources, along with consideration of the historical and cultural context in which he lived, are also used.

"For where two or three are gathered in my name, there am I among them.”
Matthew 18:20

The Cosmic Christ is the Word or Logos - is the first and most perfect individual manifestation of the Universal Godhead, the "firstborn" of all creatures. Its individuation took place in the early days of Creation, before the rise of any other creature, visible or invisible.

Because it is the "highest individual manifestation of the Universal Spirit; as well as intuitive thinking, or Word, Christ is the Creative cause of all things, so is the Cosmic Thought, the author of the Universe, immaterial and material: "By him, all things were made."

The Christ or the Cosmic Christ is a powerful energy field of Consciousness, that permeate and expand the Divine creation through its all-inclusive Rays of Mercy, Compassion, and Hope. How powerful this consciousness really is, is still inconceivable to us, because it is capable of being in all places, permeating layers and dimensions naturally. At the same time, when two or more persons gather in prayers, it is able to attract the Awareness  and protection of this powerful Logos. Only a High Divine Being, namely born from the Heart of God can sustain such field of frequencies and respond accordingly.

In esoteric Christian and Spiritual teachings, the Historical Jesus of Nazareth was the focal point for and anchored on behalf of humanity, the Cosmic Christ in the world during his time of physical incarnation.