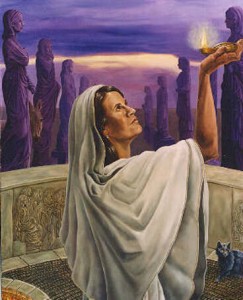 Hestia’s sacred flame shone continuously in homes and temples. All cities had the fire of Hestia, placed in the palace where the tribes would meet. Hestia’s hearth had around a sacred space, a center, a focal point, a point of heating. This fire was created directly from the use of sunlight. When the Greek cities were founded outside of the capitals, they took part of the hearth fire as a symbol of connection with the earth and the mother city and lit the new hearth fire where the political center of the new city would be.

Always fixed and immutable, Hestia ultimately symbolizes the continuity of civilization. At Delphi, there was kept at perpetual flame with which to light Hestia’s other altars. Each pilgrim who came to visit the city first was advised to make a sacrifice honoring Hestia. Hestia, the chaste goddess of the households, is the great mother and protector of all married women, homemakers and the goddess of the home. In ancient Greece, to revere Hestia meant to cultivate a ritual of sitting around a fireplace. For the happiness of a couple, it was deemed necessary to have a fireplace or an altar that would give warmth, comfort, continuity, shared awareness, and collective identity.

No home and no temple were sanctified without her presence. Hestia was both a spiritual presence as well as a sacred fire that provided light, heat, and warmth to the food. Hestia shared the image of the sacred fire with Hermes, who was the alchemical spirit imagined as the fire element. This fire was considered the source of intuitive knowledge, symbolically located in the center of the Earth.