“The greatness of a nation and its moral progress can be judged by the way its animals are treated.”

Animal Chakras are not different from our own chakra system. As the vibration of the chakra energy system creates in human beings the projections of auric field and extra-physical bodies; 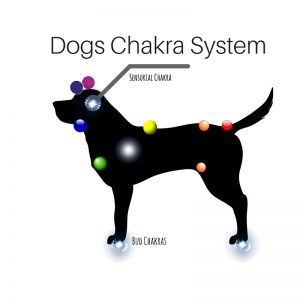 the same occurs with our animal friends. The same type of vibration also creates an aura around them with luminous smoky tone. The animal chakra system also can emit different colors that will be depending on the shape and intensity, carry very different meanings.

The colors schemes of the Animal Chakras system are similarly situated as the human system is, and have practically and substantially the same functions as human chakras. What differs is that most forms of animals are quadrupeds and the alignment of chakras is positioned horizontally.

In animals, the energy field is usually wider. This condition is due to its natural survival instinct, and they tend to absorb much more sensory information than humans. They receive and distribute energy through the chakras individually, which makes them sensitive to subtle vibrations and atmospheric changes.

Some animals, for instance, become agitated before a thunderstorm or an earthquake; they can experience different kind of vibrations that humans are incapable of perceiving.

Most animals have eight major active chakras, 21 secondary or minor chakras and six buds, known as Bud Chakras (4 in footpads and two openings in the ears). The eight main chakras play an important role in the general behavior of the animals, and they are stimulated by a variety of ways. Animals often rub their bodies on trees, objects, and the floor and even in people, to activate them or balance them. 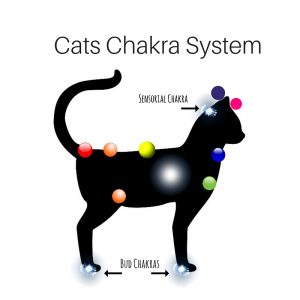 Anything that causes a lock, or the obstruction or disruption in the flow of subtle energy, in one or more chakras can lead to disease. This is a holistic truth that is widely accepted by all energetic healers. The etheric body, as well as the chakras, can become blocked, affecting the flow of energy in the animal. The disease is generally perceived in the subtle bodies before they manifest in the physical body

An animal that has suffered physical trauma, mental or emotional abuse often may not always be able to repair the imbalance energy, thereby allowing physical illness to manifest.

The animal chakras can be harmonized through various methods or therapies, which are based on the energy balance and purpose of each chakra. In general, the balance of the whole body of the animal is done in all the chakras, beginning with the root chakra at the base of the tail, or the brachial chakra. The corresponding treatments can be done using acupuncture, color therapy, Reiki, and flower remedies.

Acupuncture in animals, for example, has been shown to be a beneficial treatment for diseases of the nervous, reproductive, respiratory and heart (circulatory) systems. It is known to relieve the physical pain, to promote wellness, providing balance, which gives the animal a better quality of life. Also working with the animal chakras can be a resourceful way as a preventive treatment, as it is primarily indicated for elderly animals suffering from chronic pain and which are more sensitive to medications; among these, it is worth mentioning also the animals in cancer treatment and animals with spinal problems.

Located on the bottom end of the spinal cord, near the tail region and is also associated with the anus. Its function is to supply energy to the adrenal glands. It is connected to the instinct of survival and preservation; with physical strength, stability and good cheer. It is from this chakra that comes to their instinct for communication, such as barking, purring, howling, grunting, and snorting. The color of this chakra is also red.

This energy point is located both below the abdomen and above the pelvis. Its functions are related to the urinary system and sex organs. The glands are the gonads (ovaries and testicles). Energetically it is related to the excitement, sexual desire, security and sense of taste. Its color is Orange.

This system is located in the central area of  the animal's abdomen and reflecting actively in the back. The gland is the pancreas and is directed related to the organs responsible for digestion and liver. This chakra is linked to the strength, purpose, and origin. Inevitably the performance of this chakra is directly affected by the emotions of the animal. Its color is yellow.

This vortex if located in the central area of the chest of the animals. It plays an important role in the immune system and is associated with the heart and lungs. It represents the chakra of compassion and love. Just as humans, the animals are also pursuing the Christic template of ascension and transcendence and the Heart Chakra is vital for the development of their evolutionary framework.

It is associated with emotion, balance, sensitivity and sharing. Its color is light green.

Located in the throat and is related to the thyroid and parathyroid glands. It represents the system of communication, creativity, and expression. It connects the functions of the hearing and vocalization. Its color is sky blue

This center is located between the eyes, just above the nose. It is their sensory reception of the external environment and its transmission to the brain. It works as an auxiliary system to biological control. It is associated with awareness, sensitivity, and the sensations. Their colors are blue, indigo and violet.

This chakra just like in humans is located on top of the head and controls all aspects of body and mind animal. It governs the pineal gland, the nervous system, and spinal cord. This represents the higher connection of matter with the superior Devic strength that governs the lives of the animals. It is associated with serenity, balance, peace, liberation and wisdom. Its color is violet.

This is the main chakra for any animal. It is located in the shoulder area of a cat , in each of the sides. It is the access channel to the other major chakras. This chakra plays an important role in the bond between animals and their humans. It is associated with the bronchial plexus, the nerves of the head, neck, and thorax. Its color is black. It is not a negative tone of black; it is black because it incorporates in itself all the vibrations of the system.

You can access the entire energy field of the animal quickly, putting a hand on this Chakra. Anatomically, this Chakra accesses the Bronchial Plexus Nerve, an important network of innervation of the head, neck, and chest.

It also can access all other Chakras, which is useful in the treatment of an animal that is very nervous and will not tolerate being touched anywhere else. In very sensitive animals, one can do an energy treatment only by contact with this specific area.

The Brachial Chakra is the main center of power in all animals and refers to the interaction between humans and animals. Animals that have a strong and healthy bond with their human companions usually have this chakra very pulsating and vibrant.

Interestingly enough, the root chakra along with the solar and crown remain open from birth to death of the animals. The others are opened or closed in accordance with the stimulation given to each one of them.

The bud-chakras and other minor chakras appear as rings of light with various colors mixed with white sparks. The ears are described as pale yellow in color, alternating with bright blue when awake or stimulated.

The bud-chakras are found in each paw (paddy, underside, etc.) and the opening of the base of each ear. They connect the animal with the energy of the earth and are extremely sensitive to subtle changes in vibration energy. When there is a point of positive energy (cats: negative), the animals lie on it to absorb the good energy through solar and root chakras.

The 21 minor Animal Chakras systems regulate the sensorial systems and can be found throughout the body. The most important are the tip of the nose, tail, and ears. The "sixth sense" of animals emanates these chakras.

The 12 Chakras of Cats 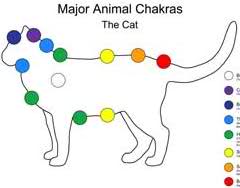 We have no doubt that Cats are special animals, even from the energetic point of view, because they have the ability to suck the negative energies from the environment, and transmute them inside of their auric fields. Probably this is the best explanation why they spend many hours sleeping and processing and also why they have 12 major chakras. The Cat’s gland system is quite similar in location to the dogs with no additional glands. Because there are more Chakras, one can see that the cat is a sentient being energetically special.

The Cardiac Chakras make a triangle. One of the points (green) is close to the heart of another and another Thymus/ Spinal Dorsal.

Yellow dots - the most dorsal region is somewhat kidney and pancreas.

White Point: there is the Bronchial Plexus, which is a crossroads of nerves, lymph, and blood vessels.

The Use of Floral Medicine for Emotional Healing