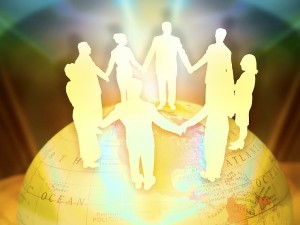 Throughout history, there has been an ebb and flow between organized Religions and Spirituality. For the most part, at least in the West, organized Religions have held the upper hand. During the latter part of the last century, there began a shift in perceptions and a questioning of the Tenets of Faith. People in search of Truth and of the purpose to our existence on this planet have been stepping off the Paths of traditional Religions and moving towards ones of self-discovery. This is not to say that these Paths lead in different directions – they do not – only that there is an increasing desire for a more personal relationship with Creation and the Creator than just following the basic forms allowed in the religions we have been raised in. For some, these Paths lead full circle to a stronger Faith in their original religious teachings. For others, the Path leads to Eastern practices such as Buddhism, Mysticism such as Kabbalah, or esoteric teachings such as the Divine Feminine.

Since the advent of the new millennia, there has been a surge in the rising tide of Spirituality. This is due, in large part, to the wide-spread use and personalization of the internet, and the growth of such on-line communities as MySpace, Zaadz, Youtube and others. It has become easy to not only find information, but to engage in instant communication with people around the world who want to share discoveries and knowledge.

A phenomena resulting from the rise of Spirituality and the growth of the internet is Spiritual Activism. Spiritual Activism is an answer to a need to do more to help others than just donate money or time. Many people are no longer satisfied with just the traditional charities. In part, this is because the focus is often so broad that the donor feels completely removed from the end result. While Disaster Relief, or Feeding the Hungry, or Sheltering the Homeless are all laudable and necessary goals, the scope is so large-scale it is difficult to feel a personal connection with the process.

As an individual grows spiritually, the desire to give of themselves and not just their resources grows as well. This is because there is a fundamental truth that becomes evident at some point - we are all connected. Whether you see that connection solely through our shared humanity, or you understand the energetic links between all things, or you believe in the spiritual congress of our collective souls; the fact remains that, whatever your beliefs and however you are comfortable expressing it, we ARE all connected. For example, there are a lot of differences between an educated engineer living in the United States and an uneducated plantation worker in Bangladesh; but the similarities are much more important if you open yourself to them. We both need food and shelter. We both have hopes, dreams and a desire to provide a good home and future for our children. We both possess dignity and deserve respect and understanding. We share a common humanity. We both possess a soul that resonates with its own unique beauty. Our differences are superficial. Our similarities are manifest. We are the same. There IS a connection.

It is knowledge and understanding of this connection that allows an individual to develop Compassion as part of their daily way of life. It is compassion that compels us to reach out from the heart to help others. This, in turn, expands our capacity for Love which furthers our personal spiritual growth. Raising another, raises you as well. Helping another becomes a form of self-love as well as an expression of outward love. This becomes an upwardly spiraling cycle of increasing awareness, increasing connection, increasing compassion, increasing involvement, increasing capacity, and back to increasing awareness. An individual’s spiritual advancement and corresponding spiritual activism raises not only themselves and the recipient of the action, but produces a ripple outward that advances each and every one of us as well.

Remember the connection between us.

There will always be a real need for the mega-charities to deal with such huge projects as running refugee camps, combating regional famines, or coordinating disaster relief; but in the last decade, many small non-profit organizations such as the Humanity Healing Foundation have been created to give spiritually-oriented individuals an opportunity to connect with other individuals around the world to help heal individual needs, whether that is rebuilding a single tsunami-ravaged village in Bangladesh, or teaching spirituality to reduce inner-city gang violence in Los Angeles, or setting up a special hospital in Africa to help women who have been horribly brutalized and mutilated.

“You must be the change you wish to see in the world." - Mahatma Gandhi