Healing Burma:  Getting Relief to Myanmar

The U.N. warned that a second wave of deaths will follow unless the military regime lets in more aid.  Up to 2,500,000 people in the Irrawaddy River delta urgently need food, water and shelter.

The International Red Cross estimates the current death toll lies between 68,833 and 127,990 victims.Myanmar’s military junta has agreed to let in a paltry 160 aid workers from four Asian countries:  Thailand, India, Bangladesh and China. The U.S. will be able to send in five planeloads of supplies today, but no disaster assistance workers.

Help is not arriving in time for the people of Burma. Humanity Healing is working to support the International Burmese Monks Organization for Humanitarian Relief:

In the wake of a massive cyclone, tens of thousands of Burmese are dead. More than 40,000 are missing. A million are homeless. 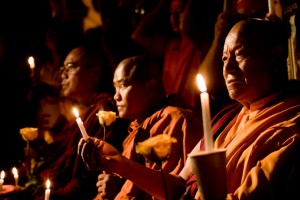 But what's happening in Burma is not just a natural disaster—it's also a catastrophe of bad leadership.

Burma's brutal and corrupt military junta failed to warn the people, failed to evacuate any areas, and suppressed freedom of communication so that Burmese people didn't know the storm was coming when the rest of the world did. Now the government is failing to respond to the disaster and obstructing international aid organizations.

Humanitarian relief is urgently needed, but Burma's government could easily delay, divert or misuse any aid. Today the International Burmese Monks Organization, including many leaders of the democracy protests last fall, launched a new effort to provide relief through Burma's powerful grass roots network of monasteries—the most trusted institutions in the country and currently the only source of housing and support in many devastated communities. Click below to help the Burmese people with a donation and see a video appeal to Avaaz from a leader of the monks:

Last year, more than 800,000 of us around the world stood with the Burmese people as they rose up against the military dictatorship. The government lost no time then in dispatching its armies to ruthlessly crush the nonviolent democracy movement—but now, as tens of thousands die, the junta's response is slow and threatens to divert precious aid into the corrupt regime's pockets.

The monks are unlikely to receive aid from governments or large humanitarian organizations, but they have a stronger presence and trust among the Burmese people than both. If we all chip in a little bit, we can help them to make a big difference.

PS: Here are some links to more information:

For more information about the cyclone, the humanitarian crisis, and the political dimension, see these articles:

New York Times: "A Challenge Getting Relief to Myanmar's Remote Areas." 7 May 2008.

ABOUT AVAAZ
Avaaz.org is an independent, not-for-profit global campaigning organization that works to ensure that the views and values of the world's people inform global decision-making. (Avaaz means "voice" in many languages.) Avaaz receives no money from governments or corporations, and is staffed by a global team based in London, Rio de Janeiro, New York, Paris, Washington DC, and Geneva.