Om Gam Ganapataye Namaha is one of the many mantas of Lord Ganesha. 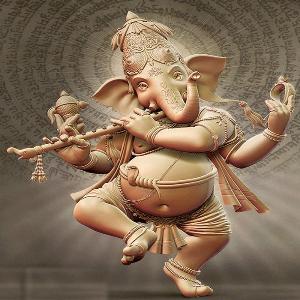 Lord Ganesha is the Master of Wisdom and Knowledge. He is the remover of obstacles, and guardian of beauty, prosperity, grace and compassion. Lord Ganesha is the first deity to be reverenced in Hindu rites. He is a guardian of doors of houses and temples. He is the God that removes the internal and external obstacles to our success, and he is the one that grants the opening of your spiritual gifts. He is also the protector of all beings.

Lord Ganesha is the Guardian of Knowledge, representing the sage, or a state of consciousness where a man reaches self-realization and plenitude of gifts.

He is the first son of Shiva, the Lord of Transformation and supreme reality and the Goddess Parvati, the Mother of the Cosmos.

He rides on the Vahana, the small mouse. He is the Presiding Deity of the Muladhara Chakra.

He is the Lord, who removes all obstacles in the spiritual path and brings worldly success. So He is called Vighna Vinayaka. His Bijakshara is Gang. He is the Lord of harmony and peace.

Lord Ganesha represents OM or the Pranava. Pranava is the chief Mantra of the Hindus. Nothing can be done without uttering it. Hence the practice of invoking Lord Ganesha before beginning any rite or work. The two feet are His Jnana Sakti and Kriya Sakti. Lord Ganesha has the elephant-head as that is the one figure in nature which is of the form of Pranava.

By the legends, Sri Ganesha was the scribe for the Vedic Texts, which he did use his tusks instead of a pen.

Lord Ganesha's Maha mantra is Om Gam Ganapataye Namaha.  Lord Ganesha’s Mantras can be chanted out loud or internally. They have been used throughout the centuries, and it is believed that the sacred power of words and the accompanying sounds in mantra aid in spiritual progression (transcending into higher states of consciousness) and to effect healing in the physical and energetic bodies.

We strongly recommend the practice of chanting the mantra for 40 days (please see the meaning of the number 40) during a spiritual ritual at the same time every day.

A very loose translation might be:
Om = Salutations! Everyone wake up!
Gam = The secret power sound of Ganesh. It is his "seed syllable" or bija mantra.
Ganapataye = Another name of Ganesh, the breaker of obstacles.
Namaha = Yo! Ganesh! You da God!

The pronunciation is also pretty easy:
Om = ohm or aum
Gam = Somewhere between "gahm" and "gum". In some dialects, it is "guhng".
Ganapataye = gah-nah-paht-ah-yeh
Namaha - Nah-mah-ha