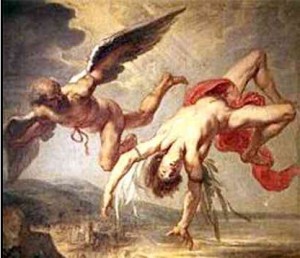 Do you remember the story of Icarus in Greek mythology?  Daedalus was the great engineer who had designed the Labyrinth for King Minos of Crete to house the Minotaur.  He was moved by the love of Princess Ariadne for Theseus and gave her the secret of the Labyrinth so that Theseus could survive.  Enraged, King Minos had Daedalus and his son Icarus imprisoned in a tower.  In secret, Daedalus fashioned wings by attaching bird feathers to a frame with wax.  They donned the wings and were able to escape the tower and start the long flight back to their homeland.  Icarus soon reveled in the glory of his new wings and the power they gave him.  Daedalus cried out to his son that the wings were built for a higher purpose than his self-satisfaction.  Icarus ignored the teachings of his father and lost in his ego; flew up to Apollo thinking his wings made him the equal of the Gods.  He had forgotten that his wings had a purpose and that his ability to fly was a gift of the Gods.  Apollo noticed Icarus as he approached the Sun God’s fiery chariot.  The Gods are not merciful with hubris.  Scornful of his termidity, Apollo allowed the heat to melt the wax that held the feathers in place on the wings and Icarus plunged to his doom.  With tears flowing, Daedalus searched in vain for his son, but all that was left were a few feathers drifting on the ocean’s swells.

The story was told to teach that the Gods did not tolerate excessive pride.

What has happened to real Lightworking?  Someone tried to give me a compliment the other day by saying they respected what we were doing and that I was a great “Lightworker.”  I thought about how that term was being bandied about these days and thanked them, but said I didn’t consider myself one – at least not in the modern sense.

Plato had it right when he wrote in his great work, The Republic, about Lightworkers and Wayshowers.  These were individuals who helped raise the human condition.  They did this by not only sharing healing through compassion but by living their lives as an example for others.  The life of a Way-shower was one of service to others.

Somehow the old definition of “Lightworking” has been left by the wayside and is being redefined from one of service to one of self-service.  You hear and read it everywhere:  “I am working on my ascension”; “I am Star-Seed”; I am an Indigo”; “I am restructuring my DNA”; “I am released from Fear”; “I am a Teacher of the Light”; “I channel Higher Beings”; “I am this”, “I am that”, “I”, “I”, “I”…….

Since when did just being a regular person doing your best or listening to your own higher self-became less meritable?

It seems like everyone is riding the Ascension Merry-Go-Round and that if you can grab the brass ring, you win and can consider yourself “enlightened.”

Carolyn Myss said it best when she wrote the ultimate purpose of the soul is service to others, not self-service.  We are ALL spiritual beings having a human experience.  That is why we are here.

I think of what is happening in places within the Lightworker's community as The Icarus Syndrome.   There is too much pride.  There is too much ego.  I know this will anger many, but I believe there is too much fantasy.  Lightworking is not some big role-playing game – a New Age Dungeons and Dragons type of thing that you can get together with friends and do for fun on a rainy afternoon.

Some individuals are given the Gifts of the Spirit.  Some people are given Abilities beyond the norm.  Some individuals are called on to be the Vehicle through which knowledge is passed.  We all have our gifts and virtues.  Each of us is special in a different way.   It is not a big deal.  We are just normal, and there is nothing wrong with being normal.  It is called the Human Experience.  We are here to learn, and we are here to grow, and we are here to help others grown and learn.  We are not here to be given a magic pill that when taken, makes an individual instantly “ascended”.  It doesn’t work that way.  We ascend together as the human race, or we don’t.  There have been very, very few who have reached enlightenment in this earthly plane of existence and were no longer bounded by earthly restrictions, such as death.  When they ascended, it was pretty obvious to all.

You can claim whatever titles you want, but if it is a title YOU claim, it probably isn’t merited.

A Lightworker should accept what gifts, abilities or teachings that they are given with gratitude and approach them with humility.  Even so, remember that these are not given for the individual’s use, but so that the individual can use them to help others.  Keep in mind that most of these gifts are humble, especially the greatest:  the ability to feel true compassion for others and to be able to act on it.  Think of each of us as being one of the gears in a giant cosmic clock.  Each gear may turn a bit differently, but each connects to others and is equally important.  Take a gear out of place and the performance of the clock is compromised.

Remember the Law of One.  We are all connected.  When we help another, we heal ourselves.

Lightworking isn’t a game or a part-time vocation.  It is hard work.  It is not easy to start a spiritual practice and make it part of your daily routine.  It is not easy to make service to others a conscious commitment in your everyday life.  It is not as easy to identify the flaws within yourself as it is to observe flaws within others.  It is even more difficult treat yourself with compassion.  Pride creates a veil of illusion that 's hard to pierce.

What this whole ramble boils down to is this:

Remember why you are here and what your Wings are for.  We are NOT Avatars of Power; we are Conduits of Compassion.

As for me…..I am just a regular guy who is doing his best.