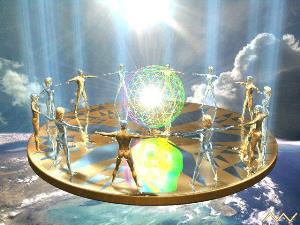 The term “new group of world servers” was coined in the 1930s by British writer and teacher who worked in cooperation with Tibetan teacher Djwhal Khul to bring forth a series of twenty volumes of esoteric philosophy. This group is a product of this time in planetary history, which is said to be the most important in the long history of life on Earth. The opportunity standing before this group is great in that it provides a link, or bridge, between the world of subjective reality and the outer world of form--between humanity and the Kingdom of God. There is a divine Plan for our planet; we are not following an uncharted course. But for many years this Plan has been interrupted by the separatism, selfishness and materialism of many people. This condition has created an interruption within the flow of spiritual life and a disruption within the working out of the Plan. Now we are reaching a critical mass wherein a sufficient number of people are awakening to the need to restore a balance in our world that comes out upon the side of spiritual values--broadly defined as a recognition of the oneness of Humanity and all life forms. This group is not concerned with and has no outer affiliation but is rather a loose subjective grouping, across all the many fields of human endeavor. The purpose of the group is fourfold:

As the consciousness of humanity evolves, new spiritual energies become available for use in service. Every seven years this group receives a powerful subjective/spiritual stimulation. There is widespread recognition of this in the popular attention given to the beginning of a new cycle of the Mayan calendar in December 2012.