The Dark Night of the Soul 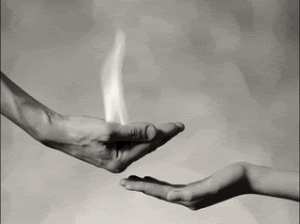 While the term Spiritual Activism is relatively new, it is not a new concept.  Plato wrote about the concept in The Republic, "These are the Torch-Bearers of Humanity, its Poets, Seers, and Saints, who lead and lift the race out of darkness, towards the Light.  They are the lawgivers and the Saviors, the Light-Bringers, Way-Showers and Truth-Tellers, and without them, Humanity would Lose its way in the Dark."  The Ancient Greeks thought that the life of the soul overlapped the life of action in the world like two life journeys separate but connected.  It was this connection that brought divine inspiration to an individual and awareness of this connection that prompted an individual to practice "right action."  Buddhist traditions refer to this awareness as "right livelihood" or "mindful living":  where your actions not only make a contribution to the world, but also to your own personal spiritual growth.

This awareness of the place inside each of us where the soul connects with our physical existence also results in the awareness of this connection in others.  The corollary to the phrase, "the Divine in me recognizes the Divine in you", is "the Humanity in me recognizes the Humanity in you."  We see the basic need in others that we have ourselves:  to live outside of fear, whether that is fear of pain, fear of dying, or fear of suffering.  This understanding of being the same within is what engenders Compassion.  It is Compassion that is the wellspring of Spiritual Activism.

Spiritual Activism does not belong to any religion or spiritual practice, nor does the term belong exclusively to any group or organization.  It is ultimately a way of living, a way of including mindfulness and compassion in everyday acts and expanding these out to include your environment and the people within it.  Spiritual Activism is Compassionate Action.  It is the layering of outwardly directed action with inwardly directed spiritual practices.  It is compassionate pursuit of service for the good of all with the understanding that helping another heals oneself.  It is a concept that moves beyond determinism or materialistic points of view.  Spiritual Activism is different from missionary work or action because it is not directed from religious dogma.  It comes from a realization of the interconnectiveness of all beings and the acknowledgement of one's responsibility to the Whole.  Once one has become aware of the implications of one's choices, one becomes obligated to assess each choice in regard to its impact on the Whole.

Somewhere along the way, the concept of Spiritual Activism in Western civilization was split into separate practices.  Modern Activism is often confrontational and is based on intellectual principles or political ideology.  There is a need to "change" a situation, but the "change" is often in the form of a redistribution of power over an issue.  There are many examples of violent clashes on social and environmental issues, caused by each side believing they are fully correct and that the other side is entirely wrong. They then try to force their viewpoint on one another.  Positive change of a situation is more likely to be successful if the parties start with common ground and work out rather than start with the differences and work in.  Modern Spirituality, especially with many New Age philosophies, is often seen as strictly a path of personal growth.  Individuals believe that they need to withdraw from their connection to others in order to work on their own "personal enlightenment."  The desires of the Self take precedent over the needs of others.  Unfortunately, this is a trap.  The selfish mindset of "me first" ultimately will send the seeker off on a tangent away from becoming self-realized and lead to unfullfillment and disillusionment in their spiritual quest.  One cannot sever the connection to others without ultimately creating a deep sense of loss.  Buddha taught that the path of self-realization ultimately was an understanding of your connection to "All That Is."

I believe Jesus is the best-known spiritual activist, although not by that name.  He understood and taught the connection between all, and his actions (to Heal, to have Faith, to show Compassion, to give Hope, to practice Kindness, to foster Reconciliation) were often directed against the status quo and towards those scorned or "outside" of the conventions of the society in which he lived - lepers, prostitutes, tax collectors and those of other Faiths.  His actions did not strictly reside within the religious teachings of the day, but moved beyond based on his own spiritual beliefs.

Modern day spiritual activists include Mahatma Gandhi, Martin Luther King Jr., Mother Theresa, the Dalai Lama and Desmond Tutu.  Each of these applied (applies) spiritual beliefs and principals towards the advancement of the human condition in different areas of society, and ultimately, to all mankind.

Modern Spiritual Activism is about reconnecting the concepts of personal spiritual growth and societal action.  It is a mindset that comes from the awakening of our perception of the interconnectiveness of all living beings and the understanding that not only do our actions make a contribution to the world, they also foster our personal spiritual development. Spiritual Activism moves the mindset of the individual from one of "me" to one of "us" and towards a goal of selfless service to others.  Selfless service does not differentiate between invisible acts of service to others and those that are recognized publicly.  It works towards the empowerment of others to not only solve the immediate dilemma, but to give the tools to prevent the repeat of the problem.  As Jesus said, "Give a man a fish and he eats for a day.  Teach a man to fish and he eats for a lifetime."

If the seeker is truly serious about growing spiritually, they must learn to balance the inward and outward journey.  The embrace of the Path of Spiritual Activism enables one to develop the noble qualities of compassion, wisdom and gratitude. It is in itself a Path of Transformation - a Spiritual Blueprint for living.

Do Not Call Me Stranger