In the Jewish esoteric tradition of the Kabbalah, the name of God is deemed sacred and unpronounceable. The origin of this concept is possibly determined by interpretation of the third Commandment:

"Thou shalt not take the name of the Lord thy God in vain: for the Lord will not hold him guiltless that taketh his name in vain." ~Exodus 20:7

A group of Jewish scholars, known as Masoretic, incorporated "inflections" and “intonations” that functioned as vowels, and, through them, made ??feasible the pronunciation of the “Tetragrammaton”, resulting in the word Adonai, or Lord, which is now alternatively used to pronounce it.

The names Jehovah, Iehovah and Yahweh are adaptations the word Adonai, but they are not the original Tetragrammaton. However, there was a belief among the Jews of the early Christian period, that the very word Torah was part of the Divine name.

There is another interesting relationship found in the original names of Adam and Eve, or Yod Chawah respectively. A combination of these two names results in variations of the Tetragrammaton, YHWH, which suggests a relationship between the Creator and his creations. With the passage of time, other terms have been adopted to refer to the Tetragrammaton: "The Name", "The Blessed", or simply "Heaven."

The Christian mystic Jacob Boehme, using Kabbalistic graphics known Tree of Life, found the 72 Names of God, which he published in 1652 in the book called Oedipus Aegypticus. All of 72 Names of God are made up of just four letters, which once again features the Tetragrammaton.

The Sacred Mantra YHWH - The Essence of God 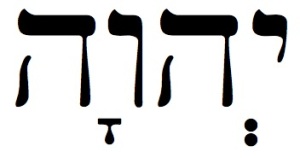 The mantra Yod He Wod He is the seed sounds of Tetragrammaton, which holds the power of programming the Superior Mind, the Crown of Light that governs the entire energetic scheme that support the extra-physical bodies and realities. The mantra Yod He Wod He lets the rise and fall of the Orders of Creation Light entering through the dimensions of the Adamic race.