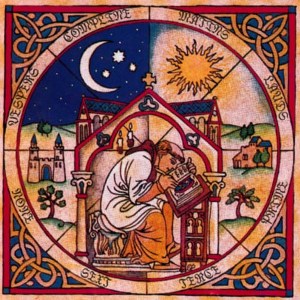 Let us not pray to be sheltered from dangers but to be fearless when facing them.
~Rabindranath Tagore

In Christian mysticism, the phrase or the Latin motto Ora et Labora reads in full: “Ora et labora, Deus adest son has”. (Pray and work, God is there (ie: God helps without delay.) The pray and work (or "pray and labor[1]"), refers to the monastic practice of working and praying, generally associated with its use in the Rule of St. Benedict.

St. Benedict of Nursia viewed prayer and work as spiritual partners, and believed in combining contemplation with action. The phrase expresses the need to balance prayer and work in hermetic settings and has been used in many religious communities from the Middle Ages onwards. Although the motto "Ora et Labora" applies as a way of life at all Benedictine monasteries up to this day, it is not explicitly elaborated in the rules of life of the Benedictine Order, the Regula Benedicts, which was written by the founder of the Benedictines, St. Benedict[2].

The German meaning of the Latin verb laborare[3] is: work, suffer, or make an effort to be in trouble and toil.  Ora et Labora thus represents the belief that the path to godhood ultimately can be achieved through prayers and hard work.

Some orders such as the Cistercians, a very stern monastic order, have applied the concept of Ora et Labora directly to farm work and became an element in the movement towards land reclamation agricultural development in Western Europe. The emphasis of Cistercian life is on manual labor and self-sufficiency, and many abbeys have traditionally supported themselves through activities such as agriculture and brewing ales.

In mystical terms, Ora et Labora reflects a spiritual work ethic that is required from someone that is trailing the many paths of the transcendent journey. Every path is sacred, and deserves not only mindfulness and focus but also effort.  Contemplation, one of the many aspects of the meditative work, requires attention and concentration in the pursuit of the refinement of the mind, to reach a one point concentrated mind, without closing it from the connection and the universal overflow of unlimited possibilities.