The Legend of Kwan Yin 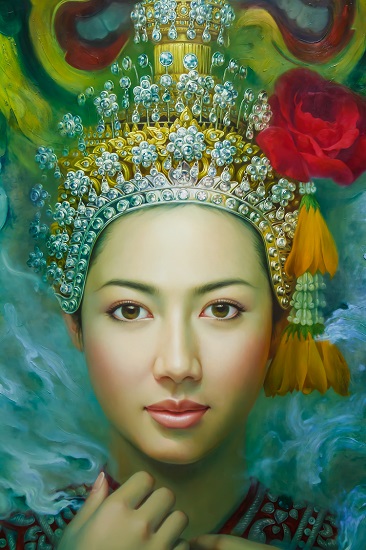 Many stories and myths have been passed down through time about this compassionate Bodhisattva. In Japan, this celestial being is known as Kannon, in China, her name is Kwan Yin, or Guanyin, and has the status of the Goddess of Mercy and Compassion and the feminine Savior of the East.

Kwan Yin is a shortened form of a name that means One Who Sees and Hears the Cry from the Human World.  In Sanskrit, her name is Padma-pâni, or "Born of the Lotus".

In the last incarnation of the Bodhisattva Kuan Yin, she was named Miao Shan. She was the third daughter of a royal king, the sovereign of the Chou Dynasty. The legend tells that when she was born, the earth trembled, flower petals invaded the bedroom and a sweet fragrance spread throughout the kingdom.  This was interpreted as a sign that someone of a high spiritual and heavenly nature had been born.

The young Miao Shan (Kwan Yin) was sweet with a very kind heart and did not want to marry. She intended instead to enter the monastery and devote her life to the work of God. Unfortunately, the King and Queen became greedy and when she grew up, tried to get her to marry a very rich suitor. The King insisted so much that she agreed to marry, as long as the King answered her three questions.

"Could he, alleviate suffering among aging?"

The king said no.

"Could he, relieve the suffering of those who fall ill?"

The king said no.

"Could he, alleviate suffering caused by death?"

And once again the king said no.

The king, finding absurd the questions his daughter had asked him, inquired if she knew someone who was capable of such feats. She answered positively and pointed out a doctor who was a gifted healer, but humble with his gifts, and proceed to say that he could relieve the suffering of his people, and him, she would marry.

The king was furious with the statement of his daughter and, to teach her a lesson, sent her to the monastery as she initially wished, but ordered the monks to instruct her to perform very hard work.  Nobody was allowed to help her or to encourage her. Afraid of the king, the monks sent her to fetch water, chop wood, and other vile heavy work. They had her built a garden in the courtyard of the monastery where the ground was stony dirt, and at the same time to take care of the kitchen. Miao Shan worked hard day in and day out without complaining.  With her gentle spirit, she eventually attracted the animals, which helped her with her tasks. Soon, Miao Shan had created a beautiful garden that began to attract the attention of travelers and passersby, and it flourished even in winter.