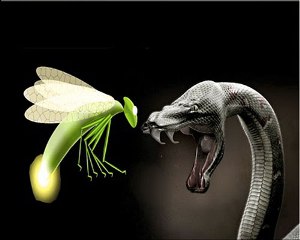 Once upon a time, there was a serpent that was persecuting a firefly. The poor firefly fled from the ferocious predator, using all the energy created by fear to speed him along.

The serpent, however, never considered giving up his pursuit, so he chased the poor firefly run away one day, and again for the second day.

The ordeal continued, until the third day.

Without the strength to continue, the lighting bug stopped and asked the Serpent, “May I ask you three questions?”

The Serpent said with a haughty tone, “I’m not used to answering anyone, but since I am going to devour you, you can ask me anything”.

Firefly: “Am I part of your food chain?”

“No” answered the Serpent

Firefly:“Did I hurt you or provoke you in any way?” asked the firefly.

“No” repeated the serpent.

Firefly: “So, why do you want to devour me?”

“Well”, said the Serpent, “because I can’t stand to see your shining light.”

In your life, there will always be “serpents” that will come about to try to steal your light and dreams; you will have two options:

You can stop shining your light, so no serpent will be after you any longer, or you can let your light shine even brighter and learn how to deal with people like that. But it will always be your choice.
“When a person consistently hurts others it is because they deeply hurt within their self. They disconnect from that side of them that is accountable for their actions. They cast empathy to the darkest part of their soul and choose to live life not in God's light, but the superficial light of significance (compliments, achievements, status, personal gain, other people's approval and ego). This dimmed light will never be greater than the one God gives to those that consistently show compassion, mercy, and empathy. These light deprived souls are the ones that will be the hardest to rescue from hell.”
-Shannon L. Alder

A Traditional Muslim Tale of Persistence