Rumi, or Jalal Ud-Din Rumi (1207-1273), is recognizably one the greatest of the Islamic mystics. Besides of his main quality of being an extraordinary poet of love and Mankind. Born in Afghanistan, he passed through the Iran, but lived his life and died in Konya, a region of Anatolia, in Turkey. It was a scholar and professor of theology, very zealous in spiritual exercises.

“And you? When will you begin that long journey into yourself?” 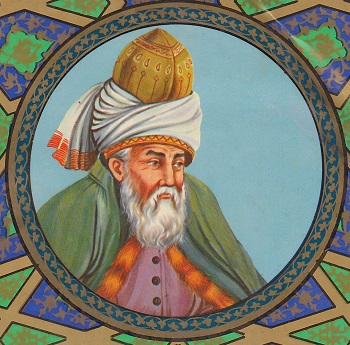 Everything in Rumi’s life changed when he met the mysterious and fascinating figure of a wandering monk: Shams Tabrizi.

As stated in the Sufi tradition, this meeting was "a meeting of two oceans." The emotional and spiritual friendship between these famous characters became unparalleled in the history of Sufism, so much so that it became proverbial in the East.

This mysterious teacher initiated Rumi into the mystical experience of love. His recognition was so high that gave him a whole book with 3,230 verses Divan of Shams Tabrizi. Divan was the meaning of a collection of poems.

Shams Tabrizi received his education in Tabriz and was a disciple of Baba Kamal al-Din Jumdi. Before meeting Rumi apparently during of his many wandering trips, he worked as a weaver and shops selling belts to support himself. Despite his occupation as a weaver, Shams received the epithet of "the embroider “(zarduz) in several biographical accounts, including the Persian historian Dawlatshah.

It seems, however, was not his real occupation, nor his true identity, as listed by Haji Bektash Veli in "maqal" and was rather the epithet given to the Ismaili Imam Shams al-Din Muhammad, who worked as an embroiderer, while living in anonymity in Tabriz.

Meeting between Shams and Rumi

“They say there is a doorway from heart to heart, but what is the use of a door when there are no walls?” - Rumi

The encounter between the two took place precisely in the late fall of 1244 when Rumi was at the age of thirty-seven. Shams Tabrizi had come to Konya, after spending a short time in Baghdad. Shams Tabrizi was a mysterious and powerful Sufi. The meeting of the two can be compared to Abraham's meeting with Melchizedek.

The following explanation is due to Murat Yagan: "A Melchizedek and Shams are messengers from the Source They do nothing for themselves, but they bring light to someone who can receive someone who is too full or too empty like Rumi. After receiving it could then apply this message for the benefit of Humanity."

A mysterious man dressed in black from head to foot arrived at the famous Inn in Konya, a place almost exclusive for sugar traders. His name was Shams Tabrizi and who claimed to be a traveler and a merchant. As stated in the Haji Bektash Veli's book, "Makalat" he was looking for something that should find in Konya. Eventually, he found Rumi, who was about to ride a horse. The meeting of both marked a turning point in the life of Jalal Ud-Din, which until then had been only a Distinguished Professor of Religion, and became a great mystic, an ecstatic poet, and lover of humanity.

It was this encounter with the dervish Shams of Tabrizi. The Oral traditions tell us that Shams had traveled throughout the Middle East searching and praying for someone who could "support his business." The voice came and said to him: "What will you give in return?" "My head!" "What you seek is on the one mounting a horse, Jalal Ud-Din."

The second meeting between the two Sufis comes to us as a story through Rumi, who is again reading a book. Rumi was reading next to a big pile of books. Shams of Tabrizi was passing by when he asked Rumi, "What are you doing?" Rumi mockingly replied, "Something you cannot understand. Rumi took a good look at the man and considered him as an ignorant stranger. At that time, the books suddenly caught on fire, and Rumi asks Shams of Tabrizi to explain what happened. His answer was: " Mowlana, something you do not understand." According to the contemporary Sufi tradition, Shams of Tabrizi mysteriously disappeared one night after talking to Rumi at his home. Some say he was killed by disciples of Jalal Ud-Din, jealous by the close relationship between their Master and Shams. It is also said that Shams Tabriz left Konya and died in Choi where he was buried.

It is also believed that Shams had been killed with Rumi's son's permission, the ‘Ala' Ud-Din. If so, Shams indeed gave his head for this mystical friendship.

Sultan Walad, son of Rumi, in his Mathnawi Walad-Nama, mentions only that Shams disappeared mysteriously from Konya without more specific details.

“Don’t grieve. Anything you lose comes round in another form.”
- Rumi