The Desert Fathers represent one important part of the history of the Christian Religion. Christianity is not as linear as the official mainstream version tries to imply. Many individuals contributed to the Christian movement throughout the time, and they did not necessarily follow the sanctioned formula imposed by the growing church power or their Fathers. The deserts lands of Egypt, Palestine, Arabia and Persia during the fourth century A.D., for instance, were inhabited by eremites. They were the first Christian hermits, individuals who have left the cities of the ancient world to live by themselves and to reach divinity from within. The reasons these men decided for seclusion are many and varied, but can be summarized in one: the search for personal "salvation. These people believed that letting someone adrift, subject to passively the tenets and values of society as they knew, was a pure and simple disaster. The fact that the emperor was now Christian and the "world" began to see the cross as a symbol of temporal power only strengthened their resolution. They doubted that Christianity and politics could be mixed as to constitute an entirely Christian society. In other words, for them, the only Christian society was spiritual and other-worldly: The Mystical Body of Christ. The Desert Fathers dealt with the "problems of their time," as belonging to the forefront of a new era; they paved the way for the development of a new man and a new society. They represent what the modern social philosophers called the emergence of the "axial man[1}," forerunner of the modern personalist man. Their practices, contemplative in Nature, allowed the person to look for answers inside themselves. 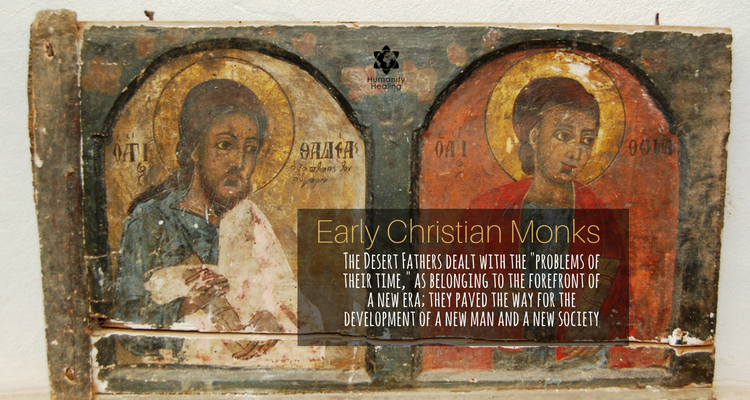 The eighteenth and nineteenth centuries gifted the world with its pragmatic individualism, a practice that degraded and corrupted the psychological inheritance of axial man birthed by the Desert Fathers and other contemplative religious sects; and that, inevitably cemented the way for the human great mental regression, hence originating the herd mentality that prevails today. What the Desert Fathers wanted above all, was to find themselves in Christ. And for that, they had to reject the "false self entirely," formal, manufactured under social compulsion in the 'world.' They looked for a path that would lead to God and that was not drawn, which could be chosen freely, that was not predetermined by others beforehand. They sought a God who could find themselves, and not a God "received" in a fixed and stereotyped format. They didn’t reject the dogmatic formulas of the Christian faith: they had adopted the accepted them in their simplest and elementary features. The escape from the arid desert horizons also meant a refusal to accept the official verbiage, arguments, and strict concepts.