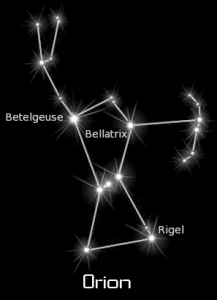 “Then Jacob departed from Beersheba and went toward Haran…He came to a certain place and spent the night there because the sun had set; (…)He had a dream and behold; a ladder was set on the earth with its top reaching to heaven; and behold, the angels of God were ascending and descending on it.

Then Jacob awoke from his sleep and said, "Surely the LORD is in this place, and I did not know it."He was afraid and said, "How fearsome is this place! This is none other than the house of God, and this is the gate of heaven." (…)He called the name of that place Bethel[1]; however, previously the name of the city had been Luz[2].”

Betelgeuse[3] is one of the larger stars that can be seen in the night sky.  It is the brightest orange or "ruddy” star in Orion constellation and marks its western shoulder of the Hunter or Giant, and it is the ninth brightest star in the sky. We are capable of understanding now the origin of the astrologer's idea that Betelgeuse heralds fortune, martial honors, wealth, and other kingly attributes. Betelgeuse alone comprises the fourth Nakshatra, the Hindu Moon Mansion, Ardra with Rudra, the storm god as its presiding divinity.  This is, perhaps, the origin of the long established stormy character of Orion.

Betelgeuse is one of the largest known Elder Stars and is approximately the combined size of the orbits of Mars and Jupiter around our sun. That is a diameter about 700 times the size of the Sun or 600 million miles.

It emits almost 7,500 times as much energy as the Sun. The combination of size and temperature tells astronomers that the star is the classification called a red supergiant. Red supergiants are stars that are close to the end of their life. Within the next ten to hundred thousand years Betelgeuse will probably end its life in a supernova explosion.

Betelgeuse is a highly evolved star whose central hydrogen fuel supply has run out. As a result, the core has contracted into a hot, dense state, and the outer portions swelled outward. We do not really know the star's condition at the moment, but the odds are that it is now in the process of fusing helium into carbon and oxygen in its core.

The core will then collapse, causing the star to blow up as a supernova, most likely leaving a compact neutron star about the size of a small town behind. If it were to explode today, it would become as bright as a gibbous Moon and would cast strong shadows on the ground and be seen easily in full daylight. 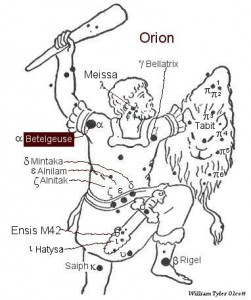 The name Betelgeuse (Alpha Orionis) is a corruption of the Arabic "yad al jauza," which means the "hand of al-jauza."  Al-jauza refers to the ancient Arabs' "Central One," a mysterious woman. For us, it marks the upper left-hand corner of the figure of the Greek's ancient hunter, Orion. Bullinger, a biblical writer, called it "The Coming of the Branch." Betelgeuse is also known as the fiery star, the royal jewel, and the Lotus flower of the Cosmos; the name also suggests a magical glow with somber red tones.

Betelgeuse has no equal in sheer volume or area of influence and emanates a tremendous amount of magnetic force from its fiery heart, which beats regularly.  Ageless Wisdom teaches that there are potent and influential forces flowing from this star.  Its magnetic energy field can stimulate the heart centers and aid in the service of those who are spiritually attuned. This star is one of the more important Cosmic Star Gates.

The Tibetan teacher Dhjwal Khul has written volumes about the innumerable forces and emanations we encounter as we spin through space, and how Humanity and the entire solar system are influenced by conditioning "rays" that come from the stars.  While he speaks that the Big Dipper registers a paramount effect on all forms of life here on Earth, he also mentioned the "potent forces" reaching us from the star Betelgeuse.

The Mayans, who also spoke of "stabbing beams that penetrate from the heavens," had an understanding of these realities with their amazing knowledge of wave harmonics and resonance theories.

Continuing with the premise that the human energy system is modeled after the great Stellar Beings described earlier through other Stellar Code Modules, it is implied that each of the chakras resonates and attunes to a specific star field. For example, if you want to open your heart chakra, meditate on the Sun or Betelgeuse and be prepared to receive the vast energies that will emanate from these Stellar Beings. Open your heart and spirit to the qualities and attributions of Betelgeuse. As we identify this incredible Stellar Code with Cosmic Love, the guiding force of our universe, we can actively partake in bringing forward humanity’s Divine Destiny.

Stellar Code™ – Betelgeuse is part of the Stellar Code™ – Fomalhaut Attunement and Initiation.  For more information, please join us for the open teleconference.  Details may be found in the Calendar & Announcements section of the University section website in the pull-down menu above.

[3] Betelgeuse is from Ib al Jauzah, the Armpit of the Central One; degenerated (from transcriptions of Arabic texts) into Bed Elgueze, Beit Algueze, Bet El-geuze, Beteigeuze, etc., down to the present title, which itself also is written Betelgeuse, Betelguese, Betelgueze, Betelgeux, etc. The Alfonsine Tables had Beldengenze, and the Italian astronomer Riccioli (1598-1671), Bectelgeuze and Bedalgeuze.  The star also was designated by various Arabian authors as Al Mankib, the Shoulder; Al Dhira, the Arm; and Al Yad al Yamna', the Right Hand, —all of the Giant Orion; but English writer on globes John Chilmead (circa 1639) wrote "Ied Algeuze,— that is, Orion's Hand."