The Good, The Bad, and The Ego

Pegasus is the flying horse described in Greek and Roman mythology. He is sometimes portrayed as being a white horse and even occasionally as having golden wings. His name is possibly derived from "springs of the ocean" or "of the wells," or "fountain horse."

There are conjectures that ascribe the origin of the horse Pegasus to Pihassassa, the ancient god of thunderstorms in Hittite mythology.
In Greco-Roman mythology, Pegasus is the winged horse that was fathered by Poseidon with Medusa. When her head was cut off by the Greek hero Perseus, the horse sprang forth from her pregnant body. 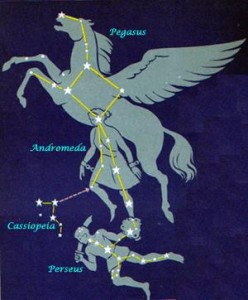 Pegasus is the fabled horse whose galloping created the well Hippocrene on Mount Helicon, a mountain in Boeotia.  This became the fountain of the Muses and was sacred to the nine muses. Pegasus became a symbol of knowledge, glory, and inspiration. Pegasus is the subject of a very rich iconography, in particular through the ancient Greek arts, especially pottery, paintings and sculptures, and through the Renaissance epoch. He can be at the same time the personification of the water of the fountain, in itself a representation of a solar myth, and the archetype of the human soul relieved from the grip of Ego.

Helicon, the sacred mountain of the Muses means "spiral." Helicon symbolizes the spiraling energy which rises in meditation (Kundalini) to bring us to the place of enlightenment.

This winged creature is seen as the symbol of the immortality of the soul and as the carrier and protector that guards the spirit in its journey to the stars. 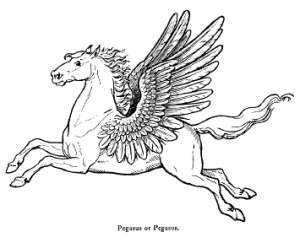 The Pegasus constellation is the group of faint stars that is visible from August through December and is located in the Northern Hemisphere near Aquarius, sharing the northeast corner of the square with Andromeda.  The star Delta Pegasus was given to the constellation Andromeda, to provide the lady with a head. Even having their light dimmed, the constellation still is the seventh-largest constellation. Its body is represented by the famous Square of Pegasus whose corners are marked by four stars.

Carl Jung saw in Pegasus a profound esoteric symbol of the spiritual energy that allows access to the realm of the gods on Mount Olympus.
Sages of the ancient astrology believed that all the stars of Pegasus protected horsemen in battle, especially the one in the eye of the Horse, the star Markab.

With time and after many adventures, Pegasus became the servant of the gods. There he was the mount of Eos to help bring the dawn or was ridden by Apollo to bring the sun. Pegasus also served Zeus by bringing to him the thunder and lightning needed for the Thunderbolts. For all his noble services, Pegasus was honored by a constellation in the autumn sky.

The Stellar Code™ - Pegasus is one of transcendent nature, which bridges the connections with the higher self, enabling us to receive Divine inspiration and to rise above the clutch of a life anchored in duality.

Stellar Code™ - Pegasus is part of the Stellar Code™ - Fomalhaut Attunement and Initiation.  For more information, please join us for the open teleconference.  Details may be found in the Calendar & Announcements section of the University section website in the pull-down menu above.