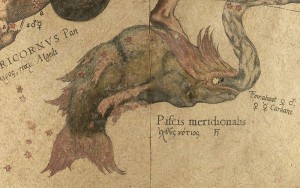 Fomalhaut, the Lonely Star of Aquarius 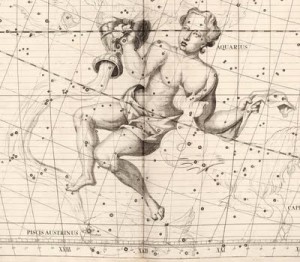 In Greek mythology, this constellation is known as the Great Fish and it is portrayed as swallowing the water being poured out by Aquarius, the water-bearer constellation. In this myth, there is a reference to the Great Deluge which supposedly happened upon Earth.  This is the Great Deluge also portrayed in the Bible in the story of Noah.  In the Greek myth, the Human character is the Waterer that had an amphora from where the water from the flood poured forth. It was because of Fomalhaut, the Fish’s mouth, that the world was saved, because the Fish drank all of the waters, thus preventing the world to be engulfed in the deluge.

The two fish of the constellation Pisces are said to be the offspring of the Great Fish. In Egyptian mythology, this fish saved the life of the Egyptian goddess Isis, so she placed this fish and its descendants into the heavens as constellations of stars. The Southern Fish was sacred to the Egyptians, who imagined the infamous Nile fish had swallowed the phallus of the dismembered Osiris[1].