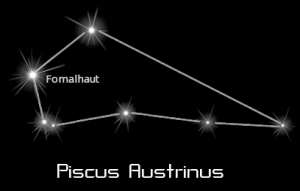 Fomalhaut is a very interesting and intriguing star because it is one of the few with a very noticeable dust belt, which is a strong indication of planet formation. Its size is approximately twice that of our Sun, with higher temperatures of almost 9000K.

Fomalhaut has had various names ascribed to it through time. One such name in common use is the Lonely Star of Autumn, because it is the only first-magnitude star in the autumn sky of mid-northern latitudes. It has been recognized by many cultures of the northern hemisphere, including the Arabs, Persians and Chinese. Archaeological evidence links it to rituals dating back to about 2500 BC. It is one of the Persians' four "royal stars"[2].

Fomalhaut, according to Flammarion, was named Hastorang in Persia approximately 3000 B.C.E. It a Royal Star, one of the four Guardians of Heaven, sentinels watching over the four quadrants of heavens and other stars.  In Greece, approximately 500 B.C.E., it was the object of sunrise worship in the temple of Demeter at Eleusis; and still later on, with astrologers, as a herald of eminence, fortune, and power. The Chinese knew Fomalhaut as Pi Lo Sze Mun.

Because it contains the first magnitude star Fomalhaut, Piscis Austrinus is more noticeable than the constellation Pisces in the night sky.

Teamwork and The Ripple Effect

[1]In Egyptian mythology, Orion is the abode of Osiris, the pharoah-god who was slain by his jackal-headed brother, Set. Osiris conquered death and, once resurrected, came to reside in Orion.