The Angel of the Presence, also known as the Solar Angel, is a highly evolved being; one that has completed various stages of initiation in different degrees. He is called into existence to guide the first twelve cells, or Lotus Petals that one day will bloom to be fully a self-realized and ascended soul, with its guidance and assistance. The Lotus is also called the “Chalice” or “Holy Grail,” and it has twelve distinctive luminous energies. When the Solar Angel builds the Chalice, the transcendent Ray of the Monad is conceived in this “womb” as the seed of the future human soul.

Certainly, no other concept in the spiritual genesis of the soul is more misunderstood than the Angel of the Presence. The relationship between these luminous beings and the souls of humans have been a matter of great questioning and are considered to be one of the bigger mysteries of Faith in many schools of knowledge and wisdom. For love and selfless service to the Logos of the Solar System, these angels were sent forth to assist the new Monads in anchoring the higher energy from above to foster their extensions, and in turn, to manifest them to the realm of experience, or third-dimensional planetary life. 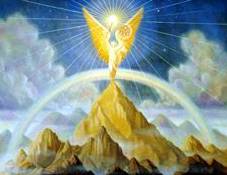 Through the Law of Grace and with great compassion, our Solar Angels make a commitment to stay with these twelve soul extensions for eons until we graduate from Earth School.

They are our fellow travelers, but with the differences that are given from millennia of previous evolution, with energies and responsibilities that go beyond what a mere human experience can encompass.

This guardian angel is called by various names. It is the Solar Angel, a radiant Being, the Meditator who is in continuous meditation trying to come in contact with the human soul. It is also called the Integrator, the bridge-builder between the human soul and his future glory.

Saint Peter called the Solar Angel, “Christ within you, and the hope of glory.”  This expression is not referring to Christ, but to the One who changes you from within. Christ is the Solar Angel for the entire Humanity just as a Solar Angel serves an individual.

A "secret code" in Leaves of Morya's Garden[1] indicates the passage through the Soul to Spirit, the Essential Divinity within:

Night fell. Christ was seated at a threshold. A scribe approached and asked: "Why dost thou sit in the passageway?" Christ answered: "Because I am the threshold of the Spirit. If thou wouldst pass, pass through me."

This same message is given in the Biblical passage, "I am the way, the truth and the life: no one comes to the Father, but by me" (John 14:6); that is, by way of the Soul or Christ-consciousness.

“The disciple, having developed two divine aspects, the creative activity of the personality and the impersonal, inclusive love of the Soul, now approaches the highest aspect, the "Will, the Life, the Father, the Monad, the One." [2] 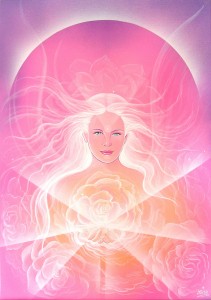 The Solar Angels have many different names throughout different cultures; it is known in Psychology as the Super Consciousness, and elsewhere as the Inner Presence, the Solar Deva, Agnishvatta Pitri, Manasputra. Some psychologists have made some confusion about this concept; they think the Self in the human core is the Transpersonal Self, while the Transpersonal Self is the Solar Angel, not the human Self. The human Self is the Transcendental Self.

“The Presence of the Soul abides with me. I walk with God by night and day. I stand with God upon the ways of men; the shadow of His Presence, which is the Presence of my Soul, reveals the God on every hand, in every man. I see divinity on every hand in every form.”
- Discipleship in the New Age, Vol. I

In the Tibetan tradition of occult meditation, the way of contact with this Being is through the Vajrasattva Meditation and the recitation of the ancient mantra with 49 Devanagari letters used in Sanskrit and 26 roman letters.  The Vajrasattva is known to be the white entity or deity that appears during the meditations as sitting above the mediator’s head.

"Life is a pure flame, and we live by an invisible Sun."
~Sir Thomas Brown

The Solar Angels have their own lives in their own dimensional reality. Thus they are considered to be the Fire Devas of the mental planes[3].  Their energies are strong enough to organize our physical, mental and spiritual bodies and keep them in perfect alignment. Even being master organizers and incubators of human souls, the Angels of the Presence are not “the human soul.”  Solar Angels came and indwelled in man as Guides, and, for a long time, it was the Solar Angels which acted like a man. The Monad was concealed, and the human soul was in preparation for birth.