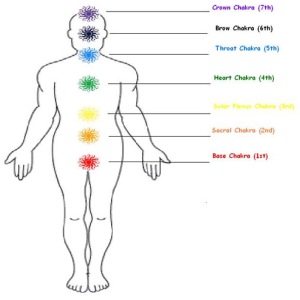 Chakras are a concept originating from Hindu texts and used in Hindu practices. Their name derives from the Sanskrit word for "wheel" or "turning". Chakras are a concept referring to wheel-like vortices which, according to traditional Indian medicine, are believed to exist in the surface of the etheric double of man.

From their Hindu origin, the understanding of Chakras and the Chakra system is now in widespread and used through all systems that deal with energy medicine.  The most commonly referenced Chakras are the seven main physical ones:

Each of the major Chakras connects the human body to the Universal Life Force energy of the Universe.  They are specialized energy centers that regulate the flow of energy through the body and are each linked to major nerve plexus and glandular centers within the endocrine system.

When functioning properly, Chakras balance and regulate the flow of energy to specific physiological systems.  If a Chakra is not functioning correctly, or “blocked”, problems can occur in the areas of the body served by the Chakras.  A lack of energy flow in the Chakras can affect the physical, mental, psychological, emotional and spiritual health of an individual.

The Chakra System is critical for the flow of energy from the Universe into and through the various systems of our physical and extra-physical bodies. 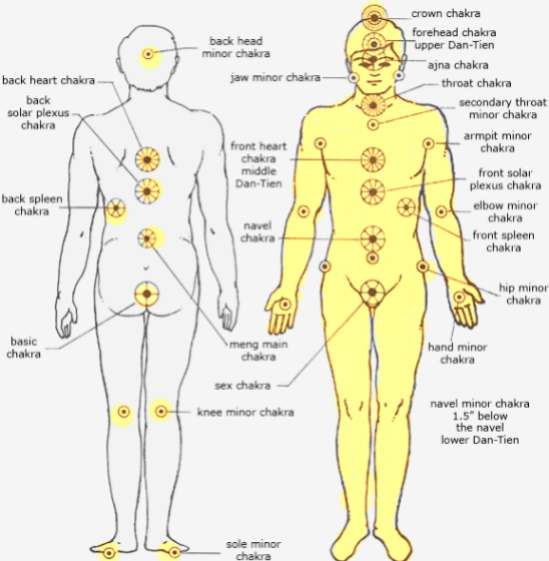 Along with our system of seven main physical Chakras, we have a web of auxiliary energy centers, or lesser Chakras, that provide a wide spectrum of energy influx into our system. There are 21 minor chakras distributed all over the body. These 21 are further grouped into 10 bilateral minor Chakras that correspond to the foot, hand, knee, elbow, groin, clavicles, navel, shoulder and ear. They are often ignored and neglected.  These are about 3 inches in diameter and are 1 inch distant from the body.

Note:  This listing of the 21 minor chakras is attributed to Alice Bailey. 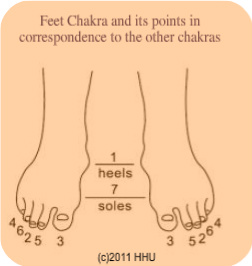 Two of these minor chakras are the system of the feet Chakras and they are very important in healing. Located on the base, or sole, of our feet; they have as a primordial purpose the discharge the “electrical” streams generated as an consequence of the normal activities and functions of the physical body.

These small, but important, Chakra vortexes can be found on the sole of each foot and they work in combination with the Muladhara Chakra or base Chakra, along with other minor chakras in the legs to create a stable lattice foundation for our physical existence. When they function harmonically, the Feet Chakras ensure a constant flow of communication and connection with the energy grids of the Earth to the rest of the chakras on our physical and extra-physical bodies.

There are even smaller vortexes. These are located where the energy strands cross each other only seven times and may very well correspond to the acupuncture points of Chinese medicine.