“I should like to be able to love my country and still love justice.”
~ Albert Camus quotes

According to an old legend from the Middle Ages, there once lived a very just and very virtuous man. One day, out of nothing, he was wrongly accused of murdering a woman. As a righteous man, he was completely innocent and, in fact; the crime was committed by someone else; the true culprit was a very rich and influential person from the kingdom. From the first moment after his hideous crime, the immoral man started to look for someone to be his scapegoat to cover up his wrongdoing.

The virtuous man was then brought to trial and despite his attempts to reason his case with logical arguments, he failed with no chance to properly defend himself. 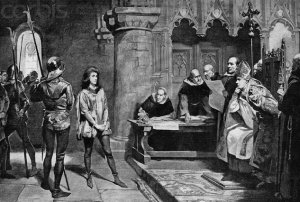 He knew that it would not be any Justice,  he had little or no chance to escape a terrible verdict.

He knew that not only the judge but all the people involved on his trail were involved in the conspiracy to set him up as the escape goat for the true author of the crime. The corrupt judge, trying to give an aspect of fair trial and appearance of Justice, but with the intention to continue with the false trial, said to the righteous man that was being accused:

“Knowing your reputation as a righteous man extremely devoted to the Lord, I will leave your fate to his hands. We will write in two separate papers, the two verdicts: One paper will say Innocent, and the other will say Guilty.” The silence took upon the room.