Kundalini means,  ‘She Who is Hidden,’ and points to the dormant goddess in every human being’s body. While the kundalini force is found in Muladhara chakra, she hypnotizes humans, like Maya herself, and renders them slaves to the illusory. Kundalini can only awaken people if she travels up along the spine- Zeena Schreck

According to the philosophy of Tantra, the entire universe is a manifestation of pure consciousness. In manifesting the universe, this pure consciousness seems to become divided into two poles or aspects, neither of which can exist without the other.

One aspect, Shiva, is masculine, retains a static quality and remains identified with unmanifested consciousness. Shiva has the power to be but not the power to become or change.

The other aspect, Shakti, is feminine, dynamic, energetic and creative. Shakti is the Great Mother of the universe, for it is from her that all form is born.

All that is found in the cosmos can be found within each individual, and the same principles that apply to the universe apply in the case of the individual being. 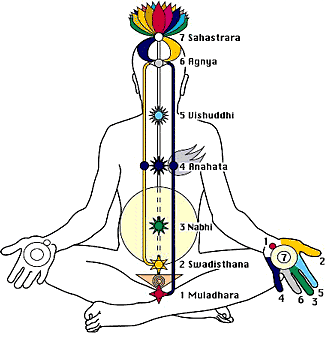 The aspirant becomes engrossed in deep meditation and infinite bliss. This raw energy is the secret tool, which, when awakened, has the power to transform an individual from ordinary to exceptional.

“Tantric scholars and Kundalini gurus often draw a distinction between the chakras as witnessed through Kundalini experiences and the Westernized model of the chakras as a "personal growth system." Some claim that this distinction is so great that there is no meaningful relationship between the two...yet I do not see these experiences as unrelated, but existing on a continuum.

I firmly believe that clearing the chakras through understanding their nature, practicing related exercises and using visualization and meditation, prepares the way for a spiritual opening that is apt to be less tumultuous than is so often the case for Kundalini awakenings. I believe this Westernization is an important step for speaking to the Western mind in a way that is harmonious with the circumstances in which we live, rather than antithetical to it. It gives us a context in which these experiences can occur.

Likewise, there are many who say that the chakras, as vortices in the subtle body, have nothing whatsoever to do with the physical body or the central nerve ganglia emanating from the spinal column and that a spiritual awakening is not a somatic experience. Because an experience is not *entirely* somatic does not mean that its somatic aspect is negated.... I believe this view is just more evidence of the divorce between spirit and body that I find to be the primary illusion from which we must awaken.”
? Anodea Judith, Wheels of Life: A User's Guide to the Chakra System

For questions and answers, visit the Tantra: From Om to Orgasm Group in our Community Network:
http://humanityhealing.ning.com

Music: Enya, More Than a Pearl and Secret Garden, Nocturn

We Honor the Unknown Artists