Angel: Messenger of the Divine

The word Angel has come down through the Christian tradition and is derived from the Latin angelos, which in itself is derived from the Greek aggelos, which is a translation of the Hebrew word mal-ach. It translates as a messenger or worker of God. Every religion has a tradition of Angels, although they do not all agree on the form, hierarchy or function. They do, however, agree that Angels are an energetic embodiment of the Divine.

There are many levels of interaction between All That Is and Man and these include Angels and Stars. According to various traditions, Angels are described as being the Souls of the Stars. When we apply the understanding that the Word of God, or Divine energy, is stepped down at each vibrational level below Source to a form that can be understood by Beings on that level, we can see that the Divine influence and flow comes through the Stars, through the Angels, and finally to earth.

In esoteric traditions, Angels taught mankind the makings of civilization after Man was driven out of the Garden of Eden. 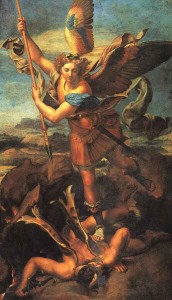 In the Old Testament Bible, two Angels are mentioned by name: Michael and Gabriel. In the Apocrypha Book of Enoch, two additional are mentioned alongside them: Uriel and Raphael. These four Angels may stand before God and are known as Angels of the Presence. They testified on behalf of Mankind before the Biblical flood was unleashed. They are also known as the Four Towers and are protectors of Mankind.

Michael's name means "Who is as God". Michael is the Archangel of Peace, Harmony, and Balance.

Gabriel's name means "God is my strength". Gabriel is the Archangel of Revelation, Creativity, and Faith.

Uriel's name translates as "Fire of God". Uriel is the Archangel of Wisdom.

Raphael's name translates as "God Heals". Raphael is the Archangel of Healing.

In addition, each of us has a personal Guardian Angel.

When in need, we may always call on them for protection and guidance.

Excerpted from The Angelus: A Compendium of Angelical Rituals and Attunements by Humanity Healing. This eBook is for the Online University eCourse Angels: Embodiments of the Divine.

The Angelus: A Compendium of Angelical Rituals and Attunements is available in the Online Resource Center of the Online University in the Menu Bar above.

Other Images including Classical Art: Google Images
We Honor all the Artists from Botticelli to Raphael