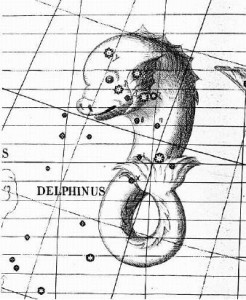 Situated to the North of the Capricorn and Aquarius constellations lies Delphinus, the Dolphin star system. Delphinus's brightest stars form a distinctive asterism that can easily be recognized.

Delphinus offers guidance for those willing to trust in greater forces for help beyond what their personal efforts can generate alone. The Dolphins, an expression of the angelic dominion, are guides for the wayward, as old salts know. They reveal the way to make safe passage to our destination provided we listen to and follow the serendipity of life.

This constellation confers fondness for pleasure, spiritual matters, and travel; however there is potential for suffering due to ingratitude.

According to the earliest legends, Delphi was originally a sacred place of the earth goddess Gaia and was guarded by her daughter, the serpent Python. Later legends state that the site was the center of the world as determined by the god Zeus. Two eagles, or ravens, had been released by Zeus from opposite ends of the earth and following great flights across the skies they finally met at Delphi. A still later legend relates that Apollo sought to slay the great serpent Python. Fleeing from the peak, Python sought safety in the sanctuary of the Earth Mother at Delphi. Apollo relentlessly pursued Python, however, and claimed the site. Later repenting of his crime, Apollo purified himself on the island of Crete and, returning to Delphi, persuaded Pan, the goat-god of wild places and evocative music, to reveal to him the art of prophecy. Upon the site of his battle, Apollo erected his own oracular temple, orienting its axis to align with midsummer sunrise and midwinter sunset, and, at the exact place where he had “speared” the serpent, an omphalos stone was set in the ground. 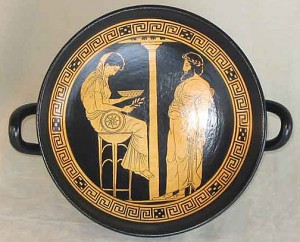 This omphalos stone later became the center of the inner sanctum of the shrine of the Delphic oracle. The site was originally called Pytho, after the guardian serpent. It was renamed Delphi after the dolphin, delphis in Greek, whose form Apollo took in order to bring Cretan sailors to Delphi so that they might become priests in his new temple.

Women were considered more sensitive than men to the oracular powers of the site.  Many archaic accounts of Delphi relate that the oracular priestesses, known as Pythia, sat upon a tripod-legged chair situated over a fissure in the earth from which emanated trance-inducing vapors.

The Stellar Code™ - Delphinus is not one of the major Codes worked with in the Stellar Code™ Matrix Mastery Program, but it is related in that it works with the energy of Annunciation.  As such, we are sharing a brief overview of the Code along with a meditation and Self-Intunement.  The Self-Attunement, or Intunement, cleans, purifies and strengthens the fifth chakra.