The Stellium is the starry crown of twelve stars which represents the perfection and the "completude" of the number 12.

By definition, a stellium is an astrological term to define an aggregation of stars or planets around the same cosmic quadrant, forming a cluster of three or more, and guarding a distance from zero to five degrees apart. The close location of these stars or planets aside from each other gives a birth theme, or an event theme, and has a very special significance. It becomes a dominant characteristic due to the emphasis of their vibration. In general, it enriches the personality and provides the spectrum of vibrations that will be expressed by the being or externalized by the event portrayed by the stellium.

"It had a great, high wall with twelve gates and with twelve angels at the gates."
~Revelation 21:12

What is a Stellium in Astrology?

In essence, a stellium occurs when you have a collection of the same type of energy in your natal chart.

This occurs when you have three or more planets in a specific zodiac sign or astrological home.

Some astrologers tend to argue that a stellium carries at least four planets in the same sign or house. Still, I think that three planets (or even fixed stars) will undoubtedly create a stellium effect.

A Stellium is particularly strong if more than 4 planets are involved, or if one of them is the Sun or the Moon, or a world in its own sign or home.

The positive characteristics of a Stellium include a concentration of energy, focus, genius, talent, self-motivation, a sense of purpose, with its own goals.

The number twelve holds high esoteric and mystical significance, all the major spiritual leaders had 12 disciples; 12 were the tribes of Israel, 12 the labors of Hercules, 12 were the sons of Jacob, the Greeks adored and worshiped 12 deities, and 12 were also the principals of Ishmael. The God Osiris in Egypt had 12 followers, Quetzalcoatl had also 12 devotees, and 12 are the Gods pertaining to the Bramanin Zodiac in India. King Arthur had 12 Knights and 12 were the divisions of the Temple of the great King Solomon. In any case, twelve is the numeric representation of the completion of a cycle, and the same time announces the entrance passage for a new state or level of reality.

Twelve is a number of perfection.

"The wall of the city had twelve foundations, and on them were the names of the twelve apostles of the Lamb".
~Revelation 21:14

In the vision from Revelation chapter 12, the Apostle John, this time a prisoner of Rome, is in exile on the Island of Patmos; saw "the Woman of Destiny". She is the same woman we see showcased throughout Holy Scripture. In Genesis, we saw her as the woman whose Seed crushes the head of the serpent. Now, the long saga has finally come to its grand conclusion, and we now see the Woman of Destiny shining forth in a blaze of glory. The 12 Stars are a symbol from the Transcendent Order of the Twelve Stars of Mary.

The Twelve Star Devotion is of baroque origin and expression. It originated with the special attention attributed to Mary as Regina Mundi or Imperatrix Mundi in the seventeenth and eighteenth centuries. Lady Mary is believed to personally bless and deliver every single soul that volunteer to a round of incarnation on planet Earth. She is also assigned with the undertaking over the recently disembodied souls leaving the Earth and assisting them to not be lost in the many manifested worlds of the fourth dimension.

Tradition says that she is the full embodiment of the Mediatrix of all Graces, the Mediator of Souls, that she holds the role of a bodhisattva being with pure wisdom, and that her 12 Stars are the representation of her fully developed system of twelve chakras.

Through the Apocrypha Gospel of Pseudo-Matthew and many early Christian writings of the Gospel of the Nativity of Mary tell us that Mary was taken to a temple on a mountain at around the age of three in the accomplishment of a sacred vow. It was ordained that Mary would be left at the temple to live a cloistered and holy life, and be educated to the highest Order. The temple in which she stayed is thought to be the one on Mount Carmel as the Essenes were the only sect to initiate women.

Lady Mary delivers and controls the activation of the constellation of energetic points on our heads called the Stellium. This focal point is also known as the Angel Chakra.

And a great sign appeared in heaven: A woman clothed with the sun, and the moon under her feet, and on her head a crown of twelve stars."
~Book of Revelation 12:1 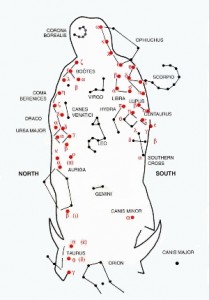 The Stellium is a map of energetic points located on the head between the third eye chakra and the crown chakra. This constellation of points is also known to be part of The Chalice because it holds the key for the netting gridwork of interrelationships between different universes and dimensions.

It is through the points of the Stellium that we receive vivid instructions about the positions, attitudes, and paths we need to undertake in certain periods of our lives, especially when we engage in participating in the macrocosmic wave of planetary evolution.

There will be instructions, absorbed as Codes of Light and to be assimilated by us, which contain the vault of instructions, situations, and events to be played on our reality with the close assistance of our Higher Self and Monadic Self.

In other words, the primary function of the Stellium is the translation of different signatures of Light Codes into smaller portions or particles, facilitating their assimilation into our Light Bodies. It builds the coefficient of Light and the ability to expand human functions and super-human abilities and allowing the full manifestation of Spirit.

Humanity Healing is offering The Stellium Attunement. For more information, visit Services in the pull-down menu at the top of the page.