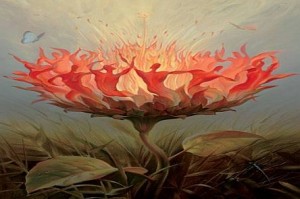 "All my own perception of beauty both in majesty and simplicity is founded upon Our Lady."
-J.R.R. Tolkien

The Holy Grail or the Chalice has been portrayed in many singular ways from different schools of thought, diverse religions, and various philosophical backgrounds. Usually, the immediate association is done through the stories of King Arthur, and the Mysterious Chalice brought to England by the legendary Joseph of Arimathea (see footnote 1), which was believed to contain or have held the Scared Blood of Christ. But in esoteric terms, the Chalice seems to have a much broader significance. 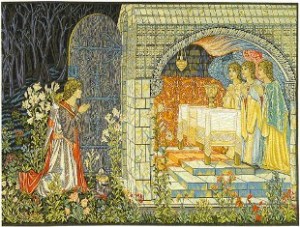 The Chalice is the original foundation brought to life by the Solar Angel or Angel of the Presence to foster the creation and development of the twelve soul extensions emanated from the form the monad. They are organized as a sanctified lotus with twelve distinctive petals. These twelve emanations are part of what ageless wisdom calls the Casual Body (see footnote 2).

The development of the Chalice is a primordial step on the path of expansion of our consciousness and the consequent anchoring of our evolutionary codes of ascension. Only through our conscious will and intention we can reach out to our Angel of the Presence and our other soul extensions that form our Chalice, and only through an open and developed Higher Heart (the Sacred Heart) can we can fill the Chalice with the Divine Light, the Holy Spirit, to alchemize it into the Holy Grail, the Holy Temple, our causal bodies with the Divine energy manifested at all its levels.

When the completion of the causal body is completed, the mystical body of the Lotus (The Angel of the Presence is the Jewel in the Heart of the Lotus, see footnote 3) created by the Solar Angel is destroyed. It is said that this is an event of cosmic proportions, as we become fully aware of our Divine Nature and our beloved Angel of the Presence is released from his assignment of mentoring and nursing the incipient soul extensions through their respective journeys of awakening. This event is metaphorically described in the Old Testament as the Destruction of the Temple of King Solomon. At this stage, one's soul now a fully realized and sovereign Being able to take upon the duties previously performed by the adamantine Angel. 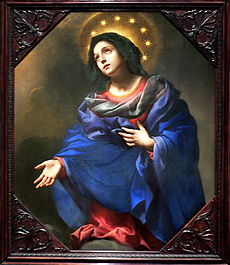 The twelve stellar points, the Stellium, is represented in Christian scripture as a diadem, a tiara, which is the crown of the Woman of Destiny, the Lady Clothed with the Sun, and who has the moon at her feet.

"And a great sign appeared in heaven: A woman clothed with the sun, and the moon under her feet, and on her head a crown of twelve stars."
~ Book of Revelation 12:1

It represents the twelve fully awaken manifestations and aptitudes of our monad in this period of evolution, as it gives the indication of the perfect alignment with all the myriad of Christ-consciousness vibrations. This proclaims the Law of One and the Oneness that overlays and permeates all the atoms of the Universal Mind.

The concept of the existence of the visible and manifested Chalice is not new; neither is it exclusive to the Judeo-Christian background.  In Ancient Egypt, the goddess Isis is singularly represented wearing a crown, with the appearance of a chalice, which contains the Sun image in itself, and which was the means of expression of her divine solar lineage.

The Sun on Isis' crown is the representation of our Soul Star fully activated.  This is the first step of awakening and enlightenment and the contact with the higher spheres of our real Being.  The Chalice itself represents the vehicle from where all the divine elements find manifestation and expression through our very own being.

1.  Since the 2nd century, a mass of legendary detail has accumulated around the figure of Joseph of Arimathea in addition to the New Testament references. Joseph is referenced in apocryphal and non-canonical accounts such as the Acts of Pilate, a text often appended to the medieval Gospel of Nicodemus and The Narrative of Joseph, and mentioned in the works of early church historians such as Irenaeus (125 - 189), Hippolytus (170 - 236), Tertullian (155 - 222) and Eusebius (260 - 340), who added details not found in the canonical accounts. Hilary of Poitiers (300 - 367) enriched the legend, and Saint John Chrysostom (347 - 407), the Patriarch of Constantinople, was the first to write that Joseph was one of the Seventy Apostles appointed in Luke 10.

During the late 12th century, Joseph became connected with the Arthurian cycle, appearing in them as the first keeper of the Holy Grail. This idea first appears in Robert de Boron's Joseph d'Arimathie, in which Joseph receives the Grail from an apparition of Jesus and sends it with his followers to Britain. This theme is elaborated upon in Boron's sequels and subsequent Arthurian works penned by others. Later retellings of the story contend that Joseph of Arimathea himself traveled to Britain and became the first Christian bishop in the Isles.

2.  This integration into his environment, his absorption of its atmosphere and his potency in progression are all related to the fact that he is created to receive impression and that he possesses a mechanism of response to all the facets of the divine expression in manifestation. It is for that reason that the truly illumined man and all who have taken the three highest initiations are always referred to as "the diamond-soled"; they, in their totality constitute the "jewel in the lotus" - that twelve-petalled lotus which is the symbol and expression of the potency of the planetary Logos.  Telepathy and the Etheric Vehicle, P 90-Master D.K

3.  As the lotus center of the heart opens and reveals the love of God, through meditation a synchronous unfoldment takes place within the head. The twelve-petaled lotus in the head (which is the higher correspondence of the heart center, and the intermediary between the twelve-petaled egoic lotus on its own plane and the head center) awakens. The pineal gland is gradually brought from a state of atrophy to full functioning activity, and the center of consciousness is transferred out of the emotional nature into the illuminated mind consciousness.

The Yoga Sutras of Patanjali, P 292