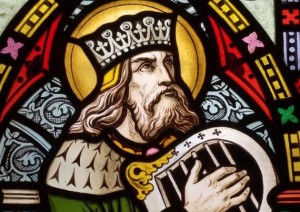 The Blessing of the Solar Angel

A Psalm is a sacred song or hymn, in particular, any of those contained in the biblical Book of Psalms.In biblical passages, King David is referred to as “the favorite of the songs of Israel” because he was the one who soothed Saul with music and was the founder of Temple singing.

A Psalm passage from the Dead Sea Scrolls attributes 3600 Tehillim plus other compositions to David.  Seventy-three of the 150 Psalms in the Bible are attributed to David, including the Psalm 151, considered by the traditional Church as an Apocrypha Psalm, but accepted as a formal canonical one by the Orthodox Church.

The supreme kingship of Yahweh is the most pervasive theological concept in the book of Psalms, and many psalms attributed to David are directed to Yahweh by name, whether in praise or petition, suggesting a close, loving relationship.

According to Midrash, King David was inspired to compose the Psalms by the Holy Spirit which rested upon him.

But King David was more than that.  It is said that many of his Psalms foretold the history of the coming Messiah.  Incidents in the life of David are regarded by the Fathers as foreshadowing the life of Christ:

Many of the Davidic Psalms, as we learn from the New Testament, are clearly typical of the future Messiahs. Several Psalms are identified with specific events in David’s life.

It is no doubt that King David had a very closed and transcendental relationship with both his Soul and his Solar angel; and, despite his shortcomings and limitations, we can perceive his sincerity in the performance of his devotional rites and the knowledge that he initially preserved to pass down to his successor, King Solomon.

King David knew that the Divine music would heal, inspire and uplift the crowds; he was well-versed in the offices of a mystical-prophetic musician.

Tradition tells us that at the time of the birth of our soul, our Solar Angels sing to our essence the Song of our Heart. It is a kind and gentle lullaby of loving devotion; that inspires us during the period of adversity to continue on the journey of love through the enlightened path of the stars. We see the same loving kindness on Psalm 23.

The LORD is my shepherd; I shall not want.

David sings that under the loving care of his Lord, his Solar Angel, he will not feel the need for the longing of anything else.  Ultimately, he steps forward to declare that he is completely integrated to his higher purpose, and what is, for him, the Will of God.

He maketh me to lie down in green pastures: he leadeth me beside the still waters.

He restoreth my soul: he leadeth me in the paths of righteousness for his name's sake.

Completely trusting in the Will of his Soul, David accepts his Dharmic purpose and knows that no matter what happens, he will be guarded and cared for.

Yea, though I walk through the valley of the shadow of death, I will fear no evil: for thou art with me; thy rod and thy staff they comfort me.

King David’s passage can be a reference to many situations: the Valley of the Shadows of Death could have been the many war scenarios faced by him during his 40-year reign as king.  But knowing that he used the Psalms as a formed of prayer recitation, we can say that he is talking about his challenges as a human being.  The Valley of Death can also mean the trials of the personality against the Higher Self that is emerging. It is also a metaphor to the preliminary steps and situations to be conquered by the true spiritual seeker before he can present himself before the highest.

Thou preparest a table before me in the presence of mine enemies: thou anointest my head with oil; my cup runneth over.

This verse is the one in which the ceremonial Blessing and Initiation into the bosom of the Solar Angel’s “cathedral” is more prominent.

The enemies to whom King David is mentioning are the personification of all his imperfections, addictions, and limitations.  They may also be read as human characters, but this is less likely.

The anointing of someone or something means the symbolic introduction of a sacramental or divine influence, a holy emanation, spirit, power or God.  For King David, it meant his enthronement in his rightful place inside of the adamantine heart of the Angel of the Presence. It is in its pure sense a rite of passage; the sanction of the Cup embodies the Blessing of the Holy Grail, entirely consecrated to the Divine will, love and service.

Surely goodness and mercy shall follow me all the days of my life: and I will dwell in the house of the LORD forever.

Following the rites of blessing and consecration of the Holy Grail, King David, also a seeker and following the path of discipleship conquered his fears and overcame his limitations. After being through the purification and consecration ceremonies, and passing through the Gates of the Temple, he is finally able to declare that he knows in his heart, now relieved from the burdens of a polarized life, that he has achieved infinite blessings of goodness and joy. Those are perennial elements in the “House of the Lord” where David set his dwellings forever.

The Mystical Christ and Self-Realization

Gifts of the Spirit