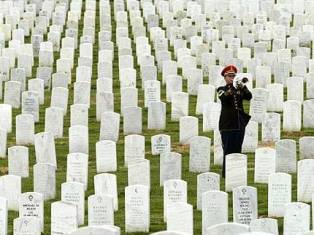 "The soldier above all others prays for peace, for it is the soldier who must suffer and bear the deepest wounds and scars of war."
~Douglas MacArthur

For Memorial Day 2009, Humanity Healing produced the video, The Path of the Warrior.  Of all the videos we have made, this video has produced the most controversy.  On one hand, we received venomous diatribes against us for “supporting the evils of the military who are propagating the policies of the New World Order” and other hate-based messages.  On the other hand, we received heartfelt gratitude from families for recognizing the sacrifice of their children/husbands/wives/fathers/mothers.

Memorial Day is not, nor has it ever been, a day to glorify war or promote a political policy for the use of the military in foreign lands.

It is a day of Compassion.  It is a day for Reflection.  Above all, it is a day for Healing.  Memorial Day is an opportunity for each of us to share respect for all Warriors who have given their lives in the service of other.  Keep in mind that Warriors come in many categories:  the men and women of the Armed Forces, the Police, Firefighters, and others.  It includes the conscientious objector who finds a way to serve that does not conflict with their personal beliefs.  It includes the individual who stands up and says, “This is wrong” in the face of tyranny.  In short, Memorial Day is a day to honor all those courageous souls who sacrificed themselves in service to others.

“There is no greater love than this, that a man should lay down his life for his friends.”
~John 15:13

I grew up in a military family.  I was 8-years old when my father was called to duty in Vietnam.  Vietnam was not a popular war and in many circles, the military, and by extension my father, was vilified.  Nightly, the television would broadcast scenes from Vietnam and of protests against the military.  Having my father called evil by people who did not know my father, simply because he was in the military, was not something I could understand at the time.  Unless you have lived through it, the constant underlying fear of a family who has a member serving in harm’s way is hard to understand.  To have a barrage of hate added to it is cruel beyond measure.

For the most part, it is better today.  Except for the occasional fringe group who protests outside of military funerals, people today better understand the nobility of service to others; and this is reflected in the respect shown to service men and women for their service, despite the personal view of the policy that places them in harm’s way.

For those who condemn the Armed Forces for who they are and what they do, or for the political policy they do not support, think on this:  where would we be if not for our Warriors?  The news this week has included the capture of Ratko Mladic, who was responsible for the horrors of the siege of Sarajevo and the massacre of 8ooo in Srebrenica , simple because they were Muslim;  and of Bernard Munyagishari , who masterminded the killing of 800,000 Tutsis in 100 days, simply because they were Tutsis and not Hutu.

The names of those with absolute power over others who gave in to hate and slaughtered innocents simply because they were different on some level , such as ethnicity or religion, will be remembered through history:  Munyagishari , Mladic,  Hussein,  Pol Pot, Hitler.  The names of the unsung heroes who stood up and said, “This is wrong” are often forgotten except by the loved ones left behind.  Until all of humanity recognizes that we are all ONE HUMANITY and steps past Hate to Peace, we will need our Warriors.

This Memorial Day, before you fire up your grill and celebrate your 3-day weekend; offer up a prayer of Healing for those who spend this day grieving and send out the energy of Gratitude to all those who have put themselves between you and the tyrants of the world.

"We shall find peace. We shall hear angels, we shall see the sky sparkling with diamonds."
~ Anton Chekhov

May Peace Prevail Upon Earth, so that the sacrifice of those we honor on Memorial Day will not again be needed.

With Deep Respect to All Who Have Served,
Christopher Buck
President
Humanity Healing International

The Gift of Forgiveness