The Moon and the Feminine 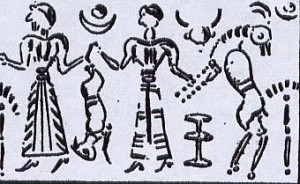 In all cultures the moon is a feminine entity, being normally associated with goddesses whose connection with the feminine aspects are exalted. She appears as the goddess of motherhood, love and prosperity. Its dark side is identified by the archetype of Lilith. The origin of the name Lilith comes from the Sumerian term Lil, which meant Wind Spirit. According to the Talmud, she was the first wife of Adam. This archetypical construct was known from the Sumerian, Babylonian, Assyrian, Persian, Hebrew, Arabic and other mythologies; this archetype became known as Lilith in Mesopotamia; as the dark and feminine side of Self, which manifests in men and women, both on a personal level, and as a collective.

An example, on a personal level, is the puerperal condition that affects women after childbirth, which is a kind of momentary madness.  Another example is the irritation of the women during the menstrual period.  At the collective level, the best example is the Feminist Movement who inspired tremendous reaction to patriarchy man, which led woman to reach the current status quo freedom.

What is a Ritual?

A ritual can be defined as a moment of celebration that allows us to tune into a particular energy or frequency. There are rituals that pertain and have importance in all main religious and beliefs systems, as they always representative of a symbolic event, of primary archetypical nature, in which a number of procedures are repeated to emulate the original event.

When we talk about performing a lunar ritual, we understand that this is a celebration outside of a usual religious context. The general idea is to create harmony with the lunar power, receiving her good energy and ask for the facilitation of something that we need to get accomplished.