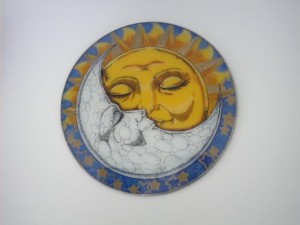 The moon, like the sun, is considered astrologically to be one of the earth’s luminaries, and illuminates our planet with the indirect light reflected from the sun. However, the moon is the only satellite of the Earth and, as such, is the celestial body that is closer to our planet.

Approximately every 27 days, the Moon completes one revolution around the Planet earth, returning to the same relative position in the night sky.  This is what we call the sidereal month.

The four phases of the moon do not rely only upon the mechanics of the sidereal month, as we are affected as well by the movement that our planet around the Sun.  This extends the time that the moon, Earth and sun return the same relative position in space. Because of these conjunct movements of the three celestial bodies, the synoptic month or lunar cycle is about 28/29 days.

In Astrological terms, the moon influences the most subjective part of the human system, the emotional body.  The emotional body, or the body of emotions, is no doubt the most susceptible to external influences. The moon influences the emotional bodies through inspiration, imagination, sensitivity, intuition and psychic visions. On the other hand, it can also influence an ego negatively bringing emotional instability, fear, quirks, over sensitivity, daydreams and unreasonable fantasies. In some sources of Ageless Wisdom, there are clear references that our cerebellum is nothing but a remnant of the Moon stage of evolution.