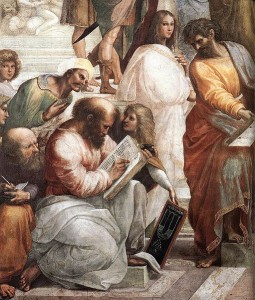 THE GOLDEN VERSES OF PYTHAGORAS-Recommendations on Living

Pythagoras of Samos is often described as the first pure mathematician. He is a critical figure in the development of mathematics, yet we know relatively little about his mathematical achievements.  Even so, modern students in math degree programs study his theorems frequently. Unlike many later Greek mathematicians, where at least we have some of the books which they wrote, we have nothing of Pythagoras's writings. The society which he led, half religious and half scientific, followed a code of secrecy which certainly means that today Pythagoras is a mysterious figure.

First worship the Immortal Gods, as they are established and ordained by the Law.

Reverence the Oath, and next the Heroes, full of goodness and light.

Honor likewise the Terrestrial Daemons by rendering them the worship lawfully due to them.

Honour likewise thy parents, and those most nearly related to thee.

Of all the rest of humankind, make him thy friend who distinguishes himself by his virtue.

Always give ear to his mild exhortations, and take an example from his virtuous and useful actions.

Avoid as much as possible hating thy friend for a slight fault.

[And understand that] power is a near neighbor to necessity.

Know that all these things are as I have told thee; and accustom thyself to overcome and vanquish these passions:  First gluttony, sloth, sensuality, and anger.

Do nothing evil, neither in the presence of others nor privately.

But above all things respect thyself.

In the next place, observe justice in thy actions and thy words.

And accustom not thyself to behave thyself in anything without rule, and without reason.

But always make this reflection, that it is ordained by destiny that all men shall die.

And that the goods of fortune are uncertain; and that as they may be acquired, so may they likewise be lost.

Concerning all the calamities that men suffer by divine fortune.

Support with patience thy lot, be it what it may, and never repine at it.

But endeavor what thou canst to remedy it.

And consider that fate does not send the greatest portion of these misfortunes to good men.

There are among men many sorts of reasoning, good and bad.

Admire them not too easily, nor reject them.

But if falsehoods be advanced, hear them with mildness, and arm thyself with patience.

Observe well, on every occasion, what I am going to tell thee:

Let no man either by his words or by his deeds, ever seduce thee.

Nor entice thee to say or to do what is not profitable for thyself.

Consult and deliberate before thou act; that thou mayest not commit foolish actions.

For it is the part of a miserable man to speak and to act without reflection.

But do that which will not afflict thee afterward, nor oblige thee to repentance.

Never do anything which thou dost not understand.

But learn all thou ought'st to know, and by that means thou wilt lead a very pleasant life.

In no wise neglect the health of thy body.

But give it drink and meat in due measure, and also the exercise of which it has a need.

Now by measure, I mean what will not incommode thee.

Accustom thyself to a way of living that is neat and decent without luxury.

Avoid all things that will occasion envy.

And be not prodigal out of season, like one who knows not what is decent and honorable.

Neither be covetous nor niggardly; a due measure is excellent in these things.

Do only the things that cannot hurt thee, and deliberate before thou dost them.

Never suffer sleep to close thy eyelids, after thy going to bed.

Till thou hast examined by thy reason all thy actions of the day.

If in this examination thou find that thou hast done amiss, reprimand thyself severely for it.

And if thou hast done any good, rejoice.

Practice all these things thoroughly; meditate on them well; thou oughtest to love them with all thy heart.

'Tis they that will put thee in the way of divine virtue.

I swear it by him who has transmitted into our souls the Sacred Quaternion, the source of nature, whose cause is eternal.

But never begin to set thy hand to any work, till thou hast first prayed the gods to accomplish what thou art going to begin.

When thou hast made this habit familiar to thee.

Thou wilt know the constitution of the Immortal Gods and men.

Even how far the different beings extend, and what contains and binds them together.

Thou shalt likewise know that according to Law, the nature of this universe is in all things alike.

So that thou shalt not hope what thou ought'st not to hope, and nothing in this world shall be hidden from thee.

Thou wilt likewise know, that men draw upon themselves their misfortunes voluntarily, and of their free choice.

Unhappy that they are! They neither see nor understand that their good is near them.

Few know how to deliver themselves out of their misfortunes.

Such is the fate that blinds mankind and takes away his senses.

Like huge cylinders, they roll to and fro, and always oppressed with ills innumerable.

For fatal strife, innate, pursues them everywhere, tossing them up and down; nor do they perceive it.

Instead of provoking and stirring it up, they ought, by yielding, to avoid it.

Oh! Jupiter, our Father! If Thou would'st, deliver men from all the evils that oppress them.

Show them of what daemon they make use.

But take courage; the race of man is divine.

Sacred nature reveals to them the most hidden mysteries.

If she imparts to thee her secrets, thou wilt easily perform all the things which I have ordained thee.

And by the healing of thy soul, thou wilt deliver it from all evils, from all afflictions.

But Abstain thou from the meats, which we have forbidden in the purification and the deliverance of the soul.

Make a just distinction of them, and examine all things well.

Leaving thyself always to be guided and directed by the understanding that comes from above, and that ought to hold the reins.

And when, after having divested thyself of thy mortal body, thou arrivest at the purest Aether.

Thou shalt be a God, immortal, incorruptible, and Death shall have no more dominion over thee.

Source: THE GOLDEN VERSES OF PYTHAGORAS: Sacred Texts By Annie Besant (Note: This work is attributed to Pythagoras, but is presumed to be attributed to him as was the Pythagorean custom) 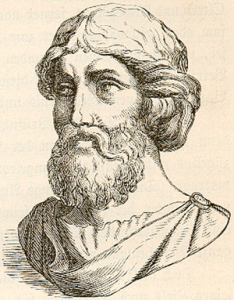 A Little about his life:

Pythagoras became the subject of elaborate legends surrounding his historical persona. Aristotle described Pythagoras as a wonder-worker and somewhat of a supernatural figure, attributing to his such aspects as a golden thigh, which was a sign of divinity. According to Muslim tradition, Pythagoras was said to have been initiated by Hermes (the Egyptian god Thoth). According to Aristotle and others' accounts, some ancients believed that he had the ability to travel through space and time, and to communicate with animals and plants.

Here is an extract from Brewer's Dictionary of Phrase and Fable's entry entitled "Golden Thigh":

Pythagoras is said to have had a golden thigh, which he showed to Abaris, the Hyperborean priest, and exhibited in the Olympic games.

Another legend describes his writing on the moon:

Pythagoras asserted he could write on the moon. His plan of operation was to write on a looking-glass in blood and place it opposite the moon when the inscription would appear photographed or reflected on the moon.