Music of the Spheres is an expression that refers to the entwined relationship connecting the structures of music and those of the physical world, and a conscious awareness of mystical or spiritual qualities being transmitted through-composed sound.

It is said that the great philosopher Pythagoras learned and developed this concept after studying in Egypt in a priesthood school.  After being captured in Egypt, he became a prisoner in Babylon; from where he finish the delineated lines of what became his Theorem.  Apparently, the Chaldeans were the first civilization to conceive of the heavenly bodies joining in a cosmic hymn ( Music of the Spheres) as they moved in stately mode across the heavens.

Aristotle ... imputed this symphony of the heavens ... this music of the spheres to Pythagoras. ... But Pythagoras alone of mortals is said to have heard this harmony ... If our hearts were as pure, as chaste, and as snowy as Pythagoras' was, our ears would resound and be filled with that supremely lovely music of the wheeling stars.
~John Milton 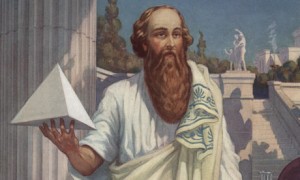 "We shall, therefore, borrow all our Rules for the Finishing our Proportions, from the Musicians, who are the greatest Masters of this Sort of Numbers, and from those Things wherein Nature shows herself most excellent and complete."
~Leon Battista Alberti (1407-1472)

Many other Greek initiates also acknowledged a fundamental connection between the individual heavens or spheres of the seven planets and the seven sacred vowels. In the Old Testament of the Bible, Job describes a time "when the stars of the morning sang together", and William Shakespeare in his play, “The Merchant of Venice”, writes: "There's not the smallest orb which thou behold'st but in his motion like an angel sings."

Nowadays, however, to understand the Pythagorean system of celestial music- Music of the Spheres, it is only possible to approximate his actual theory using our contemplative mind. He could perceive through his unique abilities, a straight correlation between every single creature and object existing in this world and believed that their energetic signatures could be translated into numbers, fractions, or even through geometrical structures. Pythagoras also believed that God does not create, He geometrized the Universe.

The concept that everything is nothing but a note in the harmony of the worlds can be observed through the study of the Greek Mystery[1] schools included in their doctrines a magnificent concept of the relationship existing between music and form. The elements of architecture on their temples, their geometric disposition, and formats, for example, were considered as comparable to musical modes and notes, or as having a musical counterpart.

"There is geometry in the humming of the strings. There is music in the spacing of the spheres."
~Pythagoras

The music of the spheres is an ancient philosophical concept that regards the proportions in the movements of celestial bodies - the Sun, Moon, and planets - as a form of "musica", the Medieval Latin name for music. Pythagoras and his followers believed that a universal philosophy could be found in numbers.

"Number is the within of all things."
~ Pythagoras 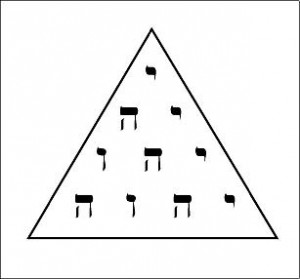 They differentiated three types of music: the music of instruments, the music of the human body and soul, and the music of the spheres, which was the music of the cosmos. Geometric shapes and even orbiting motions could be linked to this philosophy.  Indeed, Pythagoras could questionably be the first advocate of “string theory” as an instrument to perceive the universe, and the essential symbol of the tetractys[2] This concept is similar to the Tetragrammaton of the Kabbalah and contains the numbers of the perfect musical intervals of an octave, a fifth and a fourth.  This "music" is not usually thought to be audible, but a harmonic and mathematical and/or of a spiritual way to perceive it. This concept was developed further by Johannes Kepler that employed it as an auxiliary to develop his Laws of Planetary Motions.

To go deeper into this concept and relationship between the Macrocosmic Universe and the Microcosmic Universe, we have to realize that every element in Nature has its individual keynote. If these elements are combined in a composite structure, the result is a chord that, if sounded, will disintegrate the compound into its integral parts. Likewise, each has a keynote that, if sounded, will destroy him. The allegory of the walls of Jericho falling when the trumpets of Israel were sounded is undoubtedly intended to set forth the arcane significance of individual keynote or vibration, as announce to us the knowledge and of those “celestial codes” by the Hebrew army.

Source:  From the work:”The Pythagorean Theory of Music and Color”

[1] The early priests frequently demonstrated their superior knowledge of the principles underlying the phenomena known as vibration. A considerable part of the Mystery rituals consisted of invocations and intonements, for which purpose special sound chambers were constructed.

[2] The Tetractys is a symbol composed of ten dots in an upward-pointing triangular formation. It was a sacred pattern for the school of philosophers who followed the teachings of the Greek sage Pythagoras (lived 6th century BC). They used the Tetractys to swear their oaths upon, in much the same way that modern Christians swear oaths upon the Bible. The Pythagorean oath, as quoted by the Renaissance magician Cornelius Agrippa, is as follows:

"I with pure mind by the number four do swear;
That's holy, and the fountain of nature
Eternal, parent of the mind..."

Some authorities claim that the oath was sworn to the "one who bestowed the Tetractys to the coming generations," which might be interpreted to mean the Monad, or the teacher Pythagoras. Probably all three - God, Pythagoras, and the tetrad - were in the mind of the individual taking the oath. The modern perception was that the oath was primarily focused upon the Tetractys itself, as the symbolic blueprint of creation.