Explanation behind the Solstices and the Equinoxes 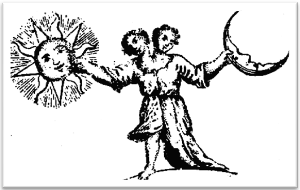 The Holy Days  are comprized of the period after the Holy Night of Christmas. The redemption of the earth, its status and its role in the future are part of the Cosmic alchemical work portrayed at the 9th Degree of the Lesser Mysteries, in many Arcane Schools. This degree is celebrated on the nights of the Winter Solstice and Summer Solstice at midnight because this ritual cannot be accomplished at any other time. The solstices mark the moment that the ground base vibration is higher and that the Cosmic Rays of Christ-consciousness and flowing more deeply: inward during the Winter Solstice and outward during the Summer Solstice[1].

“Blessed is the season which engages the whole world in a conspiracy of love.” ~Hamilton Wright Mabie

This esoteric tradition is confirmed by the ancient pagan rituals of the Mysteries, which the New Christian Mysteries came to replace in order raise the vibratory rate of these ancient rituals.

Many historians often invoke an old almanac called the Roman Chronograph, from the year 354 CE, authored by Philocalus, also known as Philocalus Calendar[2], and cites the year 336 as the first in which the Church celebrated the celebration of Christmas on December 25.

In the Armenian Church, the December 25 date was never fully accepted for Christmas, keeping the ancient tradition of celebrating the Initiation on January 6th, the Epiphany, considered the 12th Sacred Day of Mystery of the Christian tradition.

According to the Rosicrucian author Corinne Heline, the 12-day period that elapses after the Christmas solstice festivity between December 26th and January 6th is a period of profound esoteric significance and is the “spiritual heart” of the year that will follow.  It is the most sacred place/time of each coming year, is called “The Twelve Holy Days” and is under the direct influence of the Twelve Zodiacal Hierarchies[3].  These Zodiacal Hierarchies project themselves on planet earth, successively during each of these twelve days, as powerful archetypes so that the world will work together when the Twelve Hierarchies finally completes itself. The Twelve Holy Days of Christmas are a period of deep esoteric and spiritual significance: a time when the Divine Light is manifesting itself more fully in the world, building into a crescendo, until its influence can be effectually released at Epiphany.

The Sacred Temple, Self-Mastery and the Stellar Codes™

According to some historians, there was an association of Christ with the “Sun of Justice”, which gave rise to the choice of connecting Jesus’ birth date with the winter solstice to celebrate the "Natalis Solis Invicti", or “birth of the invincible sun”. It is a pagan ritual commonly called Saturnalia that celebrated with joy and rites exchanging gifts, from December 17th until the 25th,  when the Sun “grows” or is “reborn” after the day it has reached its shortest duration on 21-22 December.

On this date, the Sun reaches its maximum southern declination on the ellipse, about 23 º 26 ', where it appears to “park” for three days before returning the “way of the North” from December 24th or 25th.

The date of 25 December was also the time of the birth of the god Mithras, according to the Iranian Mysteries. Mithras was also called the “Sun of Justice” or, closer, the “Sun of Righteousness,” probably by some influence of ancient Egypt.