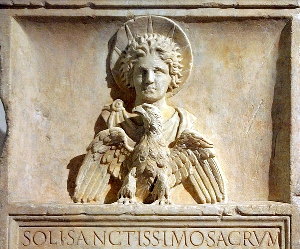 Solis Invictus, or the Invincible Sun, was a religion instituted by of Emperor Aurelian (CE 270-274), as the official recognition of sun worship in the Roman Empire. The cult of Mithras and the Solis Invictus and are virtually the same.  In fact, "The Undefeated Sun God" was a religious title applied to at least three distinct divinities during the later Roman Empire: Elagabalus, Mithras, and Sol. Contrasted to the earlier agrarian cult of Sol Indiges ("the native sun" or "the invoked sun"), the title Deus (god) Sol Invictus was formed by analogy with the imperial Roman title: titulature pius felix invictus ("dutiful, fortunate, unconquered").

In the year 307 CE, Emperor Diocletian, a sun worshiper, was involved in the dedication of a temple to Mithra and was responsible for the burning of the scripture that made it possible for the last emperors to formulate their own versions of "Christianity".

The Emperor Constantine, while claiming to be Christian, held the title of “Pontifex Maximus” [1] the highest priest of the Roman pantheon. On his coinage were written the words “Sol Comti Invictus”, or Committed to the Invincible Sun. Solar symbolism was popular with early Christian authors, as Jesus was referred to as the "sun of righteousness." 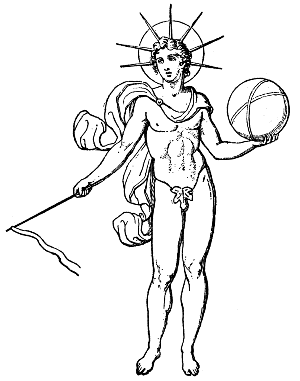 The Romans held a festival on 25 December called “Dies Natalis Solis Invicti”, or “the birthday of the unconquered sun”.  The 25th of December was celebrated as the birth of the sun, given as born by the “Queen of Heaven”, or the “Mother of God”.  Mithra was considered a mediator between God and man. The use of the title Sol Invictus allowed several solar deities to be worshipped collectively, including Elah-Gabal[2], a Syrian sun god; Sol, and Mithras, a soldiers' god of Persian origin. Sunday (Deis Solis), the Day of the Sun, was considered by Mithraists as a holy day of rest.

The Roman Mithras was perhaps the greatest rival of early Christianity for many reasons. As well as being a religion popular in the Roman Army, Mithraism had many similarities with Christianity:  Mithras was born of a virgin, remained celibate, his worship involved baptism, the sharing of bread marked with a cross and wine as sacrificial blood, leaving Sundays sacred, and Mithras was also born on December 25th. Mithras’ followers call themselves “Brothers” and were led by a priest called “Father”, or Pater. The symbols of the father were a bat, a curved sword, a ring and hat.