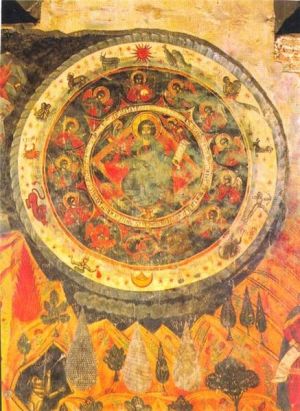 A belief commonly prevails that December 25th, celebrated as Christmas, brings to a close the spiritual festival of the mid- winter solstitial season. This is not true. It only marks the beginning or the entrance upon a period of deep significance. That period is the twelve-day interval between Christmas and Twelfth Night, days which embrace the spiritual heart of the year to follow. These twelve days have been very aptly termed the year's Holy of Holies.

This work is designed for serious students of the Christian Mysteries, to assist them in placing themselves in more complete attunement with the twelve zodiacal forces released upon the earth during this time.

Every earnest student will, therefore, make use of this sacred period for visualizing the perfected work of the Hierarchies, in meditation upon the life and work of the Disciples, and in directing the spiritual radiations from the Hierarchies through the inner centers in his body to which they are attuned. If he is faithful and persists year after year in this high endeavor, he cannot fail to receive compensation in the form of great spiritual unfoldment.

From the time of the Winter Solstice when the Christ light enters the heart of earth, the planet is swept by powerful solstitial radiations which continue, though somewhat abated, through- out the twelve Holy Days. Many and wondrous are the inner plane activities during this time. The early Christian Church concluded its esoteric ministry on the mystical Twelfth Night with the Rite of Baptism, one of its highest Initiations. Modern neophytes who have earned illumination know that it is then possible to enter into communion with divine Beings and the Lord of Light. It was such an experience that inspired St. John's Gospel, frequently designated the "Gospel of Love."