The worship of Mithras, the Invincible Sun God was practiced throughout the Roman Empire, including the British Isles. Temples in London and along the Hadrian’s Wall can still be seen today as well as some remaining in Gales and York. There is no written documentation of formal Western-style Mithraic Mysteries, the Roman "Cult of Mithras", however. The underground temples and paintings, statues and few anti-pagan documents made by the first Christians are all that remains.  In the East, Mithra was fused with Islamic lore and became part of mystical branch of Islam, Sufism. 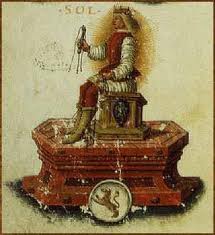 These similarities frightened the early Christian leaders.  For about 500 years before the “Coming of Christ”, all the “mysteries” of Christianity were already known. To combat this, early Christian authors said the Devil knew in advance of the coming of  the “Christ” and imitated the mysteries before they existed in order to denigrate them. As Christianity gained strength and became the formal religion of the Roman Empire, the “Cult” of Mithras was one of the first pagan religions to be attacked.  In the fifth century, temples to Mithras, like many other pagan temples, were destroyed and churches constructed on their place.

The Mysteries of Mithras remained in Britain for some time after the arrival of the Christianity from Rome.  In his “Music of the Macrocosm”, or Canu y byd mawr, the bard Taliesin (6th century AD) demonstrates his initiatory knowledge of “the Cult of Mithras”.

[1] The Pontifex Maximus was the highest priest of the College of Pontiffs (Collegium Pontificum) in ancient Rome.