"...which maketh Arcturus, Orion, the Pleiades and the Chambers to the South."
~ Job 9:9

Arcturus is the brightest star in the constellation Bootes, a golden star located above, or to the north of, Spica in the night sky. This luminary is Arcturus[1], the Herder of the Divine Will emanating from the seven stars of the Big Dipper in the constellation of Ursa Major. Arcturus is the bridge between these seven stars and Virgo the Virgin. Arcturus, like an Avatar filled with Divine Will, stimulates great evolutionary change to all in its path. In the case of the relationship between Virgo Arcturus, Virgo is the Holy Grail which receives the Will of God. 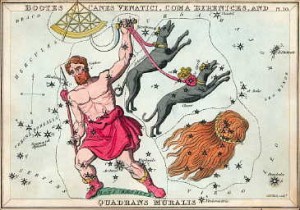 The Greeks called him Bo-o-tes, which is from the Hebrew root Bo, or to come, meaning The Coming. It is referred to in Psalm 96:13:

In Greek mythology, Arcturus was a star created by Zeus to protect the nearby constellations Arcas and Callisto (Ursa Major and Ursa Minor).

The Sleeping Prophet, Edgar Cayce Talks about the star Arcturus as “a sidereal stage through which individuals may pass through their journeys of perfection and at which period there comes the choice of the individual as to whether it is to return to complete there, the evolutionary life lessons”: in other words, whether to continue within this planetary system or to pass on to others systems or schools of learning. Edgar Cayce also said in his teachings that Arcturus is one of the most advanced Star systems in this galaxy. It is a civilization of the fifth dimension which is the Earth's future prototype. Arcturian energy functions as both emotional therapy, mental, and spiritual for humanity. It is also an energy portal through which humans pass during death and rebirth. It works as a waystation where nonphysical consciousnesses become accustomed to physicality.  The Keys of Enoch describes this Star as a center of the intermediate programming, used by a physical fraternity of this universe to govern the various types of experiments with "physical realities" in this  galaxy. 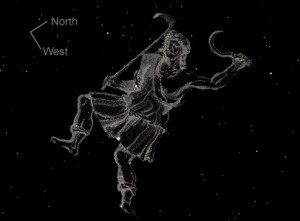 Arcturus was one of the 15 Behenian fixed stars and associated the alternate name of Alchameth. The Arabs also knew Arcturus as Al Simak al Ramih[2]. From the Arabic title came various degenerate forms: Al Ramec, Aramec, Aremeah, Ascimec, Azimech, and Azimeth, found in the compendiums of stellar nomenclature, the Alfonsine Tables and the Almagest of 1515. In ancient times, this stellar power was known to be the” Sheppard of the Heavenly flock” or   Al Haris al Sama, the Keeper of Heaven. This possibly came from the star's early brightness in the twilight owing to its great northern declination, as though on the lookout for the welfare and proper bearing of his lesser stellar companions, and so "Patriarch Mentor of the Train”.

Arcturus symbolizes the soul, who steps down and transmits the Will of God into the form and its individual personality. The personality becomes the receiver and container of this Divine Life. This eventually results in the birth of the Christ-consciousness on Earth and the evolution of matter, if regarded as a collective process.

As a personal process, this route awakens the soul to a new rebirth, a new state of consciousness where the alchemy of ascension start to recalibrate the polarities and re-integrate elements that were dissociated due to the normal perception of reality.

In the Middle Ages, Arcturus was considered a Behenian fixed star and attributed to the stone Jasper and the plantain herb. Cornelius Agrippa listed its kabbalistic sign Agrippa1531 Alchameth.png under the alternate name Alchameth.

[1] The ancient Egyptians called him Smat, which means “one who rules, subdues, and governs.” They also called him Bau, reminiscent of the more ancient Bo, which also means “the coming one.”

[2] It is probable that his old name was Arcturus, as referred to in Job 9:9, for this, is the name of the brightest star, located in the left knee. Arcturus means He Cometh.