The Wheels of Providence I

Providence is a word that comes from Latin providentia "foresight, prudence," from pro- "ahead" + videre "to see." The current meaning of the term Divine Providence derives from the sense of "knowledge of the future" or omniscience, which is the privilege of God.

The initial meaning of provider remains in “to provide” and "to take precautionary measures." As applied to God, Providence is God Himself, and also refers to that act by which God, in His wisdom, orders all the events within the universe, so that in the end, everything for which it was created may be realized.

"I believe God rules all by his divine providence and that the stars by his permission are instruments."
~William Lilly

In theology, Divine Providence, or simply Providence, is God's activity in the world. By implication, it is also a title of God. A distinction is usually made between "general providence" which refers to God's continuous upholding the existence and natural order of the universe, and "special providence" which refers to God's extraordinary intervention in the lives of people.

“Providence has its appointed hour for everything.  We cannot command results; we can only strive.”
~Mohandas Gandhi

In this sense, Providence can also be understood by the Arabic word “Maktub.”  Maktub means “It is Written.”  The Arabs feel that “It is Written” is not a good translation.  This is the root of the Soul’s purpose.  At the same time, as human beings we live in present all the time, we are given choices.  Since God/Goddess or Divine Source is Consciousness beyond time, space and dimensions He/She knows all, and by knowing Itself signifies everything is written.  To know the eternal everything is part of All That Is’s essence. 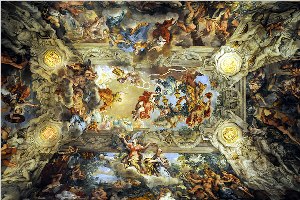 Providence has its origins in the level of the cosmic world of creation. It is the “provision” of what is known to be indispensable to a certain place and time whenever its manifestation is necessary. There are two main reasons to make “providence” possible;  the first reason is that the spiritual dimensions usually have the power and the possibility to create conditions, events, and circumstances into the lower worlds; and the second reason is that the superior worlds have the control of the dimensional element of time.

The World of Divine emanation apprehends the concept of the perfect time; knowing that everything that needs to be brought into manifestation is already created, completed and perfected because it already exists in the planes and timelines of eternity. Nonetheless, we should make a point to understand that all that exists in Potential needs a creative process to manifest, to be real.

In the creative dimension of the One Being, this process is started from the inside of the immutable Eternal Being directed outwards to the destiny of the beings, situations and events: being them angels, stars, humanity, a fish or a rock. It is a descent of Grace from the highest towards the world in which the purpose will finally manifest. This is the real mechanics of the creative sequence, which extends itself out of the world of Divine emanation, first creating the manifested universe and its worlds, and then slowly creating its beings, to inhabit these worlds. Some of these beings are proper of superior dimensions, while others are proper of lower dimensionality and mankind dances between both. Amazingly enough, this order obeys a chronological sequence, where no events can happen without the complete awareness of the Divine, because it cannot manifest if it was not originated and prepared in higher worlds, with the consequences carefully calculated to weave the destiny of the manifested. This is the essence of time.

We must add that even accepting that everything in Creation has been meticulously planned and programmed, to make sure the Will of God is accomplished, the general rule applies to the influx of time, and events may be calculated but the details not always are, especially those that refer specifically to mankind. In other words, the flow of energy in this universe does not always have the Human Agenda or personal agendas at its priority. On the other hand, Providence will come to correct major mistakes and miscarriages of fate, and compensate if there were damaging factors that affect future developments of what was originally “written.”