"…the work of the (Muslim Sufi) dervish community was to open the heart, explore the mystery of union, say fiercely search for and try to tell the truth, and to celebrate the glory and difficulty in being in human incarnation."
Author: Coleman Barks

"I remember when in my childhood I was extremely inclined to a religious behavior, and quite frankly, I was anxiously inclined to practice acts of self-gratification travestied as piety and abstinence.

One night, after spending a big amount of hours in prayers, I could not sleep, not even for a minute; and withholding the Qur’an in my lap, I took a look good around me, and saw every single person sleeping deeply.  I then commented with my dad: “Look, no one raise their heads to pray, they sleep so deeply, that we may even say they are as good as dead.” 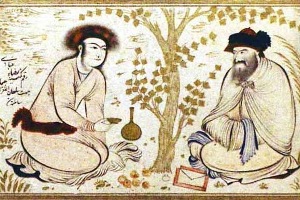 My father then answered me:

“Son, it would be better for you to also be sleeping then being awake and finding only criticism and the fault in others.”

A conceited man is only able to perceive himself, because he holds veils of vanity before his very eyes. If this same man could see through the eyes of God, he would see that there was no one more destitute of grace than himself.  ~Saadi de Shiraz, al-Gulistan
“?"Intellect is the knowledge obtained by experience of names and forms; wisdom is the knowledge which manifests only from the inner being; to acquire intellect one must delve into studies, but to obtain wisdom, nothing but the flow of divine mercy is needed; it is as natural as the instinct of swimming to the fish, or of flying to the bird. Intellect is the sight which enables one to see through the external world, but the light of wisdom enables one to see through the external into the internal world.”
? Hazrat Inayat Khan