“Every phase of evolution commences by being in a state of unstable force and proceeds through organization to equilibrium.”
~Kabbalah

For those seekers looking for a reasonable amount of information on how the structures and configurations of our Universe organize themselves to continue the flow of creation, we are sharing some basic concepts given by the ancient wisdom of the Kabbalah.  This series of articles does not have as an intention to be a definitive essay about this line of thought, but rather a clarification of concepts and a way to bring forward some philosophical food for thought.

We will start with the definition of the Three Veils of Negative existence, which, according to Kabbalah, is from where everything that has come into manifestation is derived.

There are three roots from the Tree of Life which are hidden behind the Veils of the great unmanifested, and their origin, for us, will eternally be a mystery because they are beyond our level of consciousness and understanding at this time. These three veils are layers that are pending over Kether.  They both obscure and, at the same time, represent the masks of our transcendent reality. They are known to be of “negative” existence, because every element inside these veils is not yet manifested which means not yet brought about into our plan of existence.  We may not completely understand this concept but it suggests imagery and ideas to our conscious mind. 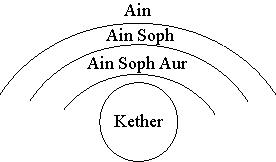 The three Veils of Negative Existence are:

The Ain, Ayin or Ein: The Absolute Nothing

The Ain Soph: The Unlimited, Limitless, or Infinite Abundance

In Kabbalah, the Ain represents the God, the Creator of all, the Transcendent One. It can translate as the Nothingness, in which everything is contained. The Ain is beyond the concept of human existence, and, at the same time, it is separated from everything because it is pure “un-manifestation of all that is or all that will come once to be”.  It is the primeval Cause. The Ain is not above or below anything, neither it is in some place, or a vacuum or void.  It is at the same time the root of Spirit and of matter, but it is not definable by any.  It is uncreated LIGHT. Only higher consciousness can really grasp in plenitude the depth of this concept.

The concept of Ain has been conveniently identified as God for the purpose of better understanding, and not only inside of the Kabbalah School of Wisdom. The Bhagavad Gita says that Parabrahman is the beginning-less absolute God about which you can neither speak that it exists nor you can speak that it does not exist. H. P. Blavatsky, the author of The Secret Doctrine[1] affirms about ParaBrahman[2] as not being God, but being supreme and not supreme at the same time; supreme because it is in itself the cause for everything, but it is also not supreme because it is effect. It is an incomparable reality; it is the Cosmos with all its content in its most elevated and complex Spiritual sense.

We can say that the Ain is the causa causorum[3]  of everything that is or will be. It is the uncreated Light, the one that was not created by any entity or Gods. The Ain is the absolute, above all things, all laws and it summarizes the perfect omniscient; the perfect and limitless happiness.

[1] Cosmogenesis, Vol 1 [2] ParaBrahman [from para beyond + Brahman (neuter) universal self or spirit] - That which is beyond Brahman. The self-enduring, eternal, self-sufficient cause of all causes, the essence of everything in the cosmos. In the Vedic style of writing, ParaBrahman is referred to as tat (that) as opposed to the manifest universe called idam (this). ParaBrahman means Supreme Brahman, or Supreme Cosmic Spirit, or Godhead. Although an ineffable entity, it could be said to be that which contains and pervades the universe. ParaBrahman, from beyond, encompasses the transcendent and immanent ultimate reality. [3] Gnostic term: Causa Causarum (Latin) "Cause of causes."
Tags
Ain Ain Soph Ain Soph Aur Ayin Bhagavad Gita Brahman causa causorum Ein H. P. Blavatsky Kabbalah Kether ParaBrahman The Secret Doctrine Three Veils of Negative Existence tree of life
0 Comments
hhteam September 21, 2011
Facebook
Twitter
Instagram
Pinterest
Youtube