From the bosom of the Ain, the Zero, it is born the Ain Soph, the Unity. In mystic Kabbalah, the Ain Soph represents the infinite; it is the whole absolute, derived from the absolute nothing, The Ain. According to tradition, God desired to see and experience itself, so allegorically, he became the Light that shines everywhere and nowhere. Ain Soph is the boundless or limitless Deity emanating and extending.

"Learn to know all, but keep thyself unknown."
~Gnostic Maxim

The Ain Soph, also written as Ein Soph, means the one without limits, the Supreme limitless of the Kabbalah.  It retains no thoughts or ideas.  In the religious metaphysics of the old Hebrews, the ONE principal was an abstraction. It may be interpreted by some like the concept of God, in its higher aspect, not constituting a BEING per se, as that is "self-contained" and "self-sufficient", which cannot be limited by its existence, since the experience of existing always limits a Being to one realm or dimension(s).

"There is one God supreme over all Gods, diviner than mortals,
Whose form is not like unto men and as unlike his nature;
But vain mortals imagine that gods like themselves are begotten,
With Human sensations, and voice and corporeal members."
~ Xenophanes

For the early Chaldean kabbalists, the Ain Soph is "without form" or being having no likeness with anything else. Ain Soph was never regarded as a "creator," Ain Soph is an NON-BEING, a principal that continues unmanifested and incomprehensible to general human intelligence, and only apprehensible to those that have an innate meta-philosophical understanding of abstract concepts.  It, therefore, does not exist as a concept freely in our minds. We can say that it is the abstract representation of the Divine Nature-Pleroma[1]

"The pure impulse of dynamic creation is formless, and being formless, the creation it gives rise to can assume any and every form."
~Kabbalah quote 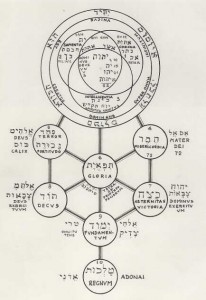 From the Ein Sophall that is "creation" derives, but not an equal creation, not in essence, neither in potency relatively to the Ain Soph; which by itself, through the divine and uncreated light irradiates from itself an intelligence and power that carry characteristics of its maker, but because they are a derivation of it, it manifests itself with limiting and finite aspects. Kabbalah calls the first spiritual emanation Ain Soph, the Ancient of Days[2], the being of our being, the Mother/Father within ourselves; The Supreme Deity is No-Thing, it is nameless and therefore called Ain-Soph, the word Ain meaning nothing. Because it cannot express itself in a limiting countenance of creation in our plan of existence, the Ain Soph manifest itself through the ten sephiroth of the Etz Chaim, the Tree of Life.

In Ain Soph exist a different form of evolution; it retains the seeds of understanding of the days and nights of Brahma, or the Cosmic Days and Nights, Mahanvantara and Pralaya.  The Christ and the Logos reside beyond this realm. During the Pralaya, the Cosmic Night, the Ain Soph only exists inside of the Divine Mind.

Interestingly enough, for the ancient Aztecs, the Ein Soph is "Tonatiuh," the demiurge, creator, which it represented in the center of the Tzolkin, the solar calendar of the Mayas.

Cosmic Architecture I – The Ain