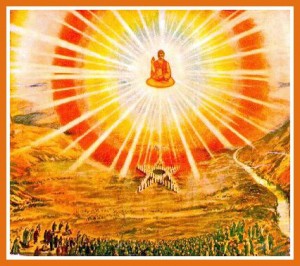 The Spiritual Festival of the Buddha

The Significance of Wesak

The Wesak Festival has been traditionally associated in eastern civilization with the Buddha, esoterically recognized as the divine intermediary between the highest spiritual center on the planet, Shamballa, and the Hierarchy.

The Buddha is the expression of the Wisdom of God, the embodiment of Light and the indicator of divine purpose, cooperating at this festival with his brother the Christ, who represents the Hierarchy. The Buddha embodies the Principle of Light, and because of this illumination humanity was able to recognize the Christ, embodiment of the still greater Principle of Love.

Each year at the time of Wesak, two great streams of energy ~ one focused through the Buddha and the other through the Christ ~ are fused and blended, and it is the task of world servers to precipitate this combined energy into the waiting world.

The Wesak Festival is indeed a great spiritual event, with a powerful effect upon humanity. Groups of aspirants can at this time become channels for the higher energies released through the medium of the two focal points ~ the Buddha, who represents the over-lighting essence of subjective realities, and the Christ, representative of aspiring humanity.

This is symbolized in religious rituals where the priest acts as the focal point; here, however, the priesthood in this great ceremony of contact is not a separate entity. All can be priests, the single qualification being the capacity to align oneself and been rapport with the Soul, and thus be able to cooperate with other souls.

Wesak is a time of unusual inflow of life and of spiritual stimulation, serving to vitalize the aspiration of all humanity. At the time of the festival, through the united effort of the Christ and the Buddha working in closest cooperation, there is opened a channel of communication between humanity and deity through which an approach can be made to Those Who guide our planet, so that aspirants and disciples are able to contact energies not otherwise easily available.