Karmic diseases or ailments are usually experiences brought into your reality from other lifetimes as a result of physical injury or grievance committed against another living being. The physical karma may have involved many aspects of direct and indirect harming to another being not necessarily resulting in deaths.  It can be the consequence of harming another, emotionally, sexually, mentally or psychologically, therefore, inducing a physical reaction.

Any action that might have caused harm to the health of others or oneself whether in physical, mental, emotional or sexual realms can actively induce physical karma. Consequently, these diseases are present in our spiritual DNA as unbalanced patterns, and they are enshrined in our Akashic Records, as everything that happens in our lives has been stored.  These patterns tend to determine what happens and will happen to each of us. The information from the Akashic Records will only be given to an individual when it is being used to heal oneself and one's influential portion of the divine plan entrusted to the soul for this planetary lifetime.

Karmic diseases may manifest in one's current existence depending on the degree of recurrence or impairment caused to the soul involved in creating the karma or unbalance.

It has been observed that most of the manifestations of the karmic disease beyond karma involved offer evidence of obsessions: haunting and lingering energies of old enemies, astral miasmas that continue to influence in the physical manifestation of these disorders.

An example is that is very common for women with the karma of successive abortions in other incarnations to be affected by diseases in their feminine organs in the present existence which may prevent or make tough to them to become mothers. Each karmic illness comes as the ultimate physical lesson to be learned for the soul.

When this happens, the spirit which chose to reincarnate as a child is the aborted fetus in the other life who then creates the mothers' suffering: in most cases energetic attacks of hurt, anger or revenge of the spirit rejected.

There are cases, however, where the mother and child form an agreement before the pre-chosen reincarnation. In this contract, both agreed to go through the experience of pregnancy; she may give birth to a child with physical disabilities, where the bonds of love, responsibilities, and care are tested and healed for as long as they live.

But we may always remember that everything in the universe is in resonance within the parameters of divine justice, no action is aleatory or random.

The karma in question may have been individual or collective. An example of collective karma is the participants of the Catholic Inquisition in the Middle Ages that together spread terror across the world, torturing and killing Jews, Muslims, "witches", homosexuals and any who dared to think differently.

Consequently, as an organization now it has been suffering through many later incarnations of the victimized souls from problems and persecutions of sorts, on the physical level, and it will be as such until its karma is balanced and transmuted. 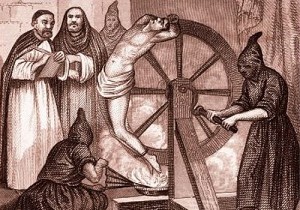