Karmic diseases can be acquired through sexual karma, beyond the act of raping or inflicting death following rape, sexual karma also can be the use of sexual magic to manipulate someone through occult practices with predetermined objectives.

This unbalanced frequency may extend itself on one's energy matrix through several incarnations. It is very common with this type of binding that the occurrence and the transmission frequency of venereal diseases and viral diseases which work as a chip inside the astral body.

Karmic illness induced through mental karma brings about thought-forms that may create the illusion of mental persecution to the alleged victim. The oppressor issues desires of revenge, hatred, bitterness, and all sorts of atrocities on the mental level to destroy someone for something that they feel wronged about. This is one of the reasons for mental illnesses and various other mental disorders. Mental Karma can be reflected in one's lives through depression, sense of emptiness, social dysfunctions, and they are all echoes of thought -forms, energy forms called elementar (not to be confused with elementals)

Elementars are loads or frequencies of mental and emotional energy combined and emitted from thoughts and feelings and can take any shape depending on the vibration source and intention of the creator of it.

There have been many negative elementars formatted for centuries by our experiences within the matrix manipulation, which are rooted in our souls, and therefore in our DNA. Some examples of generating elementar emotions: anger, hatred, envy, jealousy, fear, guilt, bigotry, curses, among others.

An elementar is formed by the same materials and substances of the universe and therefore can take on a life of its own and create numerous losses to the victim. They are the result of human creation.  They are creatures, but they do not have souls. Their life span is proportionally related to the original feeling or emotion that created them. If the emotion ceases to exist, so do them.

The name elementar comes from being made of primeval elements of nature. Any of these waves emitted by a person to the victim who has the same encoding may be affecting them gravely because they are vibrating at the same frequency or they unknowingly possess this same kind of elementar, which at its turn induce a creation of mental karma.

Emotional karmas are much more extensive in nature than merely inflicting death upon other because of passion. The pursuit of objects, situations, and things by means of purely satisfying greed, can bring many problems to the emotional and also physical bodies.

Any Karmic illness, being it a result of physical, mental or emotional karma, will continue to act up upon an individual until the karmic pattern generator of the unbalance is transmuted and purified.

These karmic configurations will be registered in our spiritual DNA and also in our Akashic records, and their complete healing will inevitably involve an awakening and an integrated healing that can be extended to all levels of consciousness.

When the disease is not treated as a systemic structure, including the Karmic level, the healing may occur only at the physical level, because the modern medicine only admits one dimension of reality: the reality of the physical body. This is the reason that some illnesses such as cancer can re-surge again into one's life because the real occult cause of the unbalance was not addressed. It happens because subconsciously, the individual continues to feel that they are still in debt with the divine accounting and still did not balance its responsibilities and lessons.

This is the Law of Cause and Effect. The negative karma, however, only remains active while the soul does not choose the path of healing that involves transmuting negative Karmic patterns and frequencies, and forgives former and current enemies. To deny the path of healing through forgiveness is to remain stuck in frequencies of fear and pain and thus become responsible for their fate. 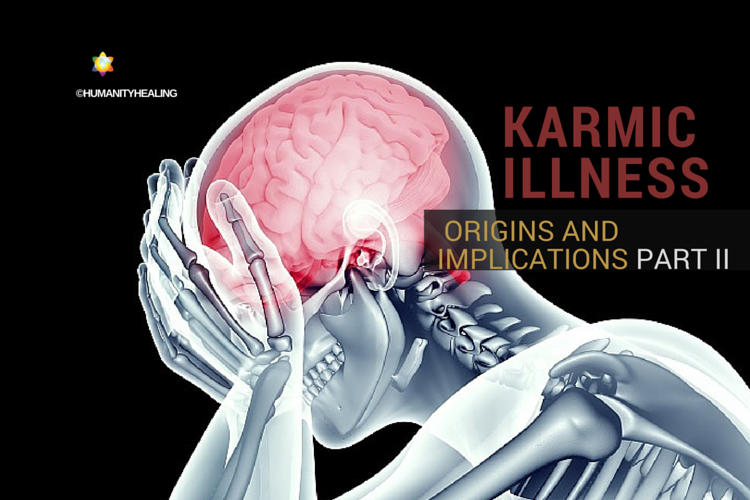